Citroen has gained for itself a useful slice of the lucrative small SUV market with this car, the C3 Aircross. Jonathan Crouch drives the revised version.

Just because a car is fashionable doesn't mean it can't also be practical too. For proof of that, Citroen brings us this C3 Aircross, now usefully revised in this updated form. This complete and highly personalisable package is their idea of what a little SUV should be.

What if you could have the style and adventurous feel of a small SUV. Combined with the interior space and flexibility of a small MPV People Carrier? It's a combination of virtues that many brands have promised. But which possibly this car actually delivers - the Citroen C3 Aircross. It first went on sale in late 2017 and prior to the launch of this facelifted version in early 2021, over 330,000 examples had been delivered. Which proves that it isn't only the French who like practical, rational cars. Gallic brands were first to popularise the MPV. And amongst the last to embrace the contradictory charms of the modern affordable family SUV. Why, they ask quite reasonably, would you want to take a supermini or family hatchback and, in pursuit of some mythical lifestyle orientation, make it heavier, clunkier, less efficient and less practical? What though, if those downsides could be minimised and the SUV in question could offer all the interior versatility you used to need one of those small supermini-MPVs to get if you required it in a really compact little car? Well that's the thinking behind this C3 Aircross, here usefully improved.

The engine line-up hasn't changed much, so as before, it's broadly shared with its C3 supermini stablemate, though this SUV-orientated model steers clear of the feeblest C3 units. The range starts with a three cylinder turbo petrol 1.2-litre PureTech 110 unit only offered with 6-speed manual transmission. If you want a petrol auto, you'll need the same engine in PureTech 130 guise, which is only offered mated to Citroen's EAT6 auto 'box. This is the latest Euro 6.3-compliant powertrain, which meets the very highest European emission standards. If you want a diesel, there's the usual 1.5-litre BlueHDi 110 unit, mated to 6-speed manual transmission. Ride quality is a little softer than the segment norm - which typical Citroen owners tend to like. This would-be SUV introduced new technologies to the C3 range, including Grip Control with Hill Descent Assist to help in the very unlikely event of an owner being brave enough to take this little Crossover off road. The enhanced traction system claims to provide control and safety even on steep inclines, reducing the risk of slipping or acceleration as the vehicle descends in forward or reverse gear. 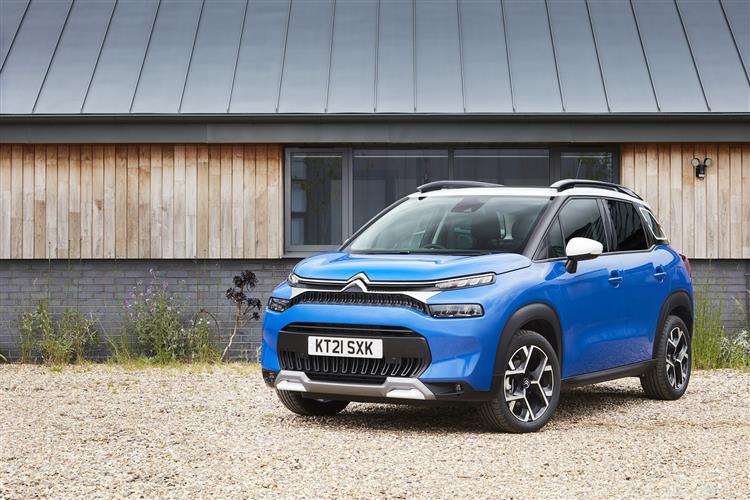