The McLaren 720S builds on the success of is 650S predecessor and offers a sharper, faster and more imposing rival to Ferrari and Lamborghini. Jonathan Crouch reports.

The McLaren 720S takes the basic formula of its 650S predecessor and tweaks the suspension, increases the aerodynamic downforce, ups the power, improves the styling and smartens the cabin. Small but incremental improvements everywhere have resulted in a markedly better car.

Yes, McLaren established its road car reputation with the incredible F1, but production of that model ended in 1998. It took another thirteen years before another road car rolled out of Woking, so when the 12C arrived in 2011, it was effectively a whole new start. Many considered that it wasn't quite on a par with the Ferrari 458 Italia, but was pretty close. Take into account that this was McLaren's first attempt in a segment dominated for decades by Ferrari and that's not a bad start. Still, McLaren is a company that always strives for class leadership and being second best doesn't wash. So in 2014, they brought us the 650S, a development of the 12C with 25% new parts and an uprated 650PS engine - hence the name. In the course of its production life, the 650S was continually improved but what McLaren as really working up to was this, the 720S, its primary 'Super Series' model.

The headliner with the 720S is its power figure - 720PS, or 710bhp in old money. It's worth putting into some sort of frame of reference quite what that means. Many thought the performance of the old McLaren F1 would be a benchmark that might never be beaten. Then the 650S came along and made 62mph from rest in just 3s, a figure this 720S model improves to 2.8s. So it's very fast: but then you knew it would be. What you need to know if you're a potential buyer is that it's more agile than before too, thanks to an 18kg weight reduction and a lower centre of gravity. There's double-wishbone suspension front and rear that's linked front to back and side to side by McLaren's hydraulically connected damper system, Proactive Chassis Control II. This works via three selectable damper settings - 'Comfort', 'Sport' and 'Track': 'Comfort' will be your default option most of the time. As for the engine, well McLaren says that 41% of it is new, the previous 3.8-litre twin turbocharged V8 uprated to one 4.0-litres in size this time round. That's mated to a 7-speed dual-clutch paddleshift automatic gearbox. 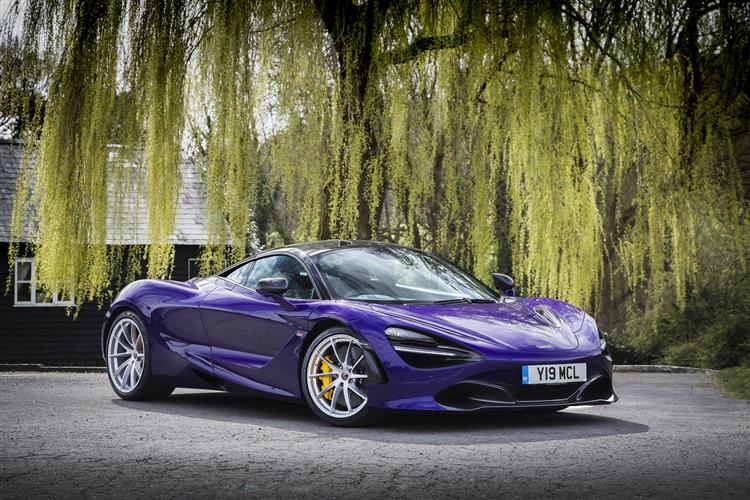