THE CONQUEST OF SPACE (some text hidden)

The Lexus RX is more versatile in its seven-seat body style. Jonathan Crouch reports on the revised version.

The Lexus brand has brought us many things over the years, but prior to 2017, the company had never made a seven-seat car. This longer wheelbase 'L' version of the brand's fourth generation RX luxury SUV put that right, with subtle changes over the standard model enabling a third seating row to be inserted at the rear. Otherwise, all the RX features that loyal buyers like are carried over intact. This RX L body style has really broadened his model's appeal and was usefully updated in 2019 to create the car we're going to look at here.

The Lexus brand omotenashi principles of hospitality these days extend to family buyers with more than a couple of kids, thanks to the availability of this RX L luxury SUV. Apart from the 110mm increase in length and slightly more vertical rear tailgate necessary to facilitate the 3rd seating row, the recipe here is exactly as it is in normal five-seat versions of the fourth generation RX model. So, there's an overwhelming emphasis on non-Plug-in hybrid petrol power and sumptuous standards of luxury in the leather-lined cabin. The fourth generation RX was first introduced in 2015 in five-seat form - this RX L variant followed in 2017 when Lexus realised that it would need a 7-dseat version if it was to properly compete with segment rivals. Both body styles received a mid-term update in mid-2019, which brings us up to date and the car we're going to test here.

So what's a hybrid RX like to drive? Well it's a full-Hybrid, the only one in this segment; don't be confused by comparisons with the 'mild hybrid' technology that rivals like Audi's Q7 offer; that's not the same thing at all. As you'll discover when you come to drive an RX. Once you've luxuriated in the beautiful leather seats and enjoyed the commanding SUV-style driving position, you press the starter button to be greeted by.. Nothing. The engine's running, true enough. It's just that at this point, it's doing so silently under battery power alone and once you set off, if you've a gentle right foot, that's all it will continue to use at speeds of up to 30mph before the 3.5-litre V6 petrol engine kicks in, controlled via a six-speed CVT auto gearbox. This mechanical package offers 308bhp and there's a useful 335Nm of torque for towing. It sounds quite good too, thanks to a sound generator system that creates a performance-style air intake roar. The E-Four 4WD system's functions have been tuned for quick response when accelerating through bends: there's no real off piste ability of course. Lexus doesn't think potential buyers will be interested - and they're probably right. As for handling, well other rivals offer a more involving drive. The RX is still one of the most comfortable, refined SUVs in its class though. Not too many dynamic changes feature with this revised version of the 'AL20'-series model. Apparently the structure is slightly stiffer. There are new shock absorbers. And the RX is now equipped with 'Active Cornering Assist' torque vectoring to maximise cornering traction. There are clever new 'BladeScan Adaptive High-beam headlights too. Otherwise, it's as you were. 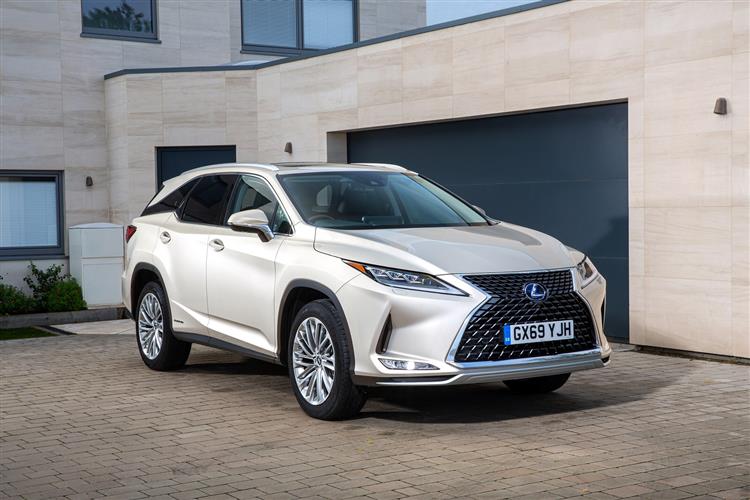