JOIN THE CLUB? (some text hidden)

In recent years, MINI has re-invented its Clubman model as a Focus-sized family hatchback. And it makes a fun and practical choice in volume Cooper D diesel guise. Jonathan Crouch looks at the revised version.

MINI is suggesting that family hatchback buyers wanting something a little different at the upper end of the Focus and Golf segment should 'go with their gut' and choose this improved second generation Clubman model. Drawing inspiration from the MINI estates of the 1960s, it's the most accessible car the brand has ever produced and also the largest. Unique twin rear doors add a dash of uniqueness too. Here, we look at the volume 2.0-litre 150bhp Cooper D version.

MINI has never really gone mainstream. In past years, the brand's BMW-era products have been stylish, quite up-market but a little different. With this second generation Clubman model though, launched in 2015, that policy started to change. This was the company's first serious attempt at a volume market segment, in this case that for Focus-class family hatchbacks. It's a very significant car. The concept of a slightly more spacious MINI is nothing new. But the delivery of one with the practicality and sophistication to directly take on the Focus fraternity very definitely is. This Clubman model can offer this because BMW itself has also entered this market with its 2 Series Active Tourer, the company's first front-driven design. The two cars share the same engines and underpinnings - which means that Clubman buyers will get more sophisticated mechanicals than they might expect from a MINI: an engine as large as 2.0-litres in size, for example, in the volume Cooper D diesel variant we're trying here.

So what's it like on the road? A little different from the MINI norm is the answer - but thankfully, not too different. No, it doesn't feel quite as sharp and frisky as the 5 Door MINI Hatch model to drive, but then this is a larger, heavier car. Anyway, compensation comes with better refinement and far superior ride quality thanks to a purpose-designed multi-link rear suspension system. If you want to tweak the damping, an optional 'Variable Damper Control' control system allows you to do it, working through the 'Green', 'MID' and 'Sport' settings of the 'MINI Driving Modes' system, another extra-cost feature. Engine-wise, the bulk of the range is based around 2.0-litre power that gives buyers the option of an 8-speed auto 'box as an alternative to the standard 6-speed manual. Most buyers will want the 150hp Cooper D diesel we tired, a car that makes 62mph from rest in around 8.5s. A pokier 190hp Cooper SD variant is also offered. Of course you can't have everything. This Clubman's larger size will make it a touch less wieldy around town than you might expect a MINI to be; the turning circle, for example, has risen from the 11.0m reading you get in a MINI 5 Door Hatch to 11.3m here. Still, we'll take that in return for the improved ride quality, something complemented by impressive refinement that would be even better if MINI could find a way of keeping tyre roar down. 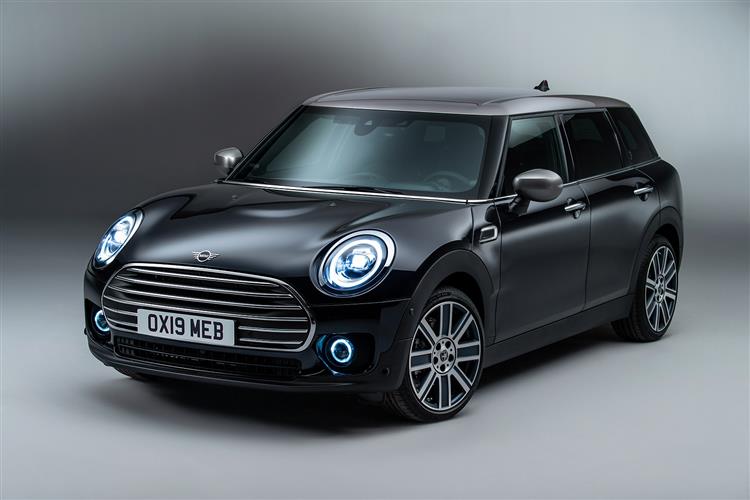