What might the ultimate Aston Martin be like? The answer, we're told, lies right here with this car, the DBS Superleggera. Jonathan Crouch drives it

Immaculately styled, obsessively engineered and outrageously potent, the DBS Superleggera claims to be every inch the Aston Martin flagship. We're here to decide whether it's a truly credible expression of everything an ultimate Aston Martin sportscar should stand for. At launch in 2018, it was billed as the fastest and most powerful road car the brand had ever built. And we're going to test it.

This, the flagship sportscar in Aston Martin's mainstream range, is a thoroughbred large-capacity front-engined V12 Super GT with badging that marks the return of two illustrious names. The 'Superleggera' (or 'Super lightweight') tag apparently pays homage to the innovative lightweight construction methods pioneered by Italian coachbuilder Touring with classic DB models of the Sixties. As for DBS, well that nameplate's been around since 1967 and was last used on the 2007-era model that Daniel Craig barrel-rolled in his 'Casino Royale' James Bond debut. This Superleggera model uses the 5.2-litre V12 trhat also features in the brand's DB11 AMR, though naturally with a lot more power and torque - 715hp and 900Nm to be exact. In addition, this Superleggera is 72kgs lighter than a DB11 AMR, courtesy of the carbon fibre panels that coat its aluminium structure. And it offers a higher level of downforce than any of the brand's previous series production models have ever generated. Let's put it to the test.

Building a track-focused Super Sportscar is one thing. Building a super-powerful Grand Touring GT sports coupe is another. Can the two genres really be combined? Super GT sportscars like this one reckon they can. Aston Martin's take on the concept may not be 'super-light' as its Italian-derived badging promises, but this DBS model's pulling power surpasses anything that rivals can muster. The 5.2-litre V12 puts out a thumping 900Nm of torque and develops 715hp, enough to propel the car to 62mph in 3.4s and to 100mph in 6.4s on the way to a top speed of 211mph. Rivals struggle to deliver this kind of power in a form able to engage and reward drivers of all ability levels, but the Superleggera is a car you don't need to be a hero to really enjoy. Ostensibly, it shares much with its lesser DB11 stablemate - not only that model's top engine but also its aluminium chassis and its 8-speed torque-converter ZF auto gearbox. There's also a revised quad exhaust, bespoke suspension geometry, wider tracks, a stiffer chassis with a tweaked front anti-roll bar, stickier, wider Pirelli P Zero tyres and a whole range of aero tweaks that can deliver as much as 180kgs of high speed downforce. There's a special feel here that no other model from the brand manages to quite replicate, creating the kind of GT the old Vanquish always should have been. The result is a car you have to try to understand everything an Aston Martin can be. 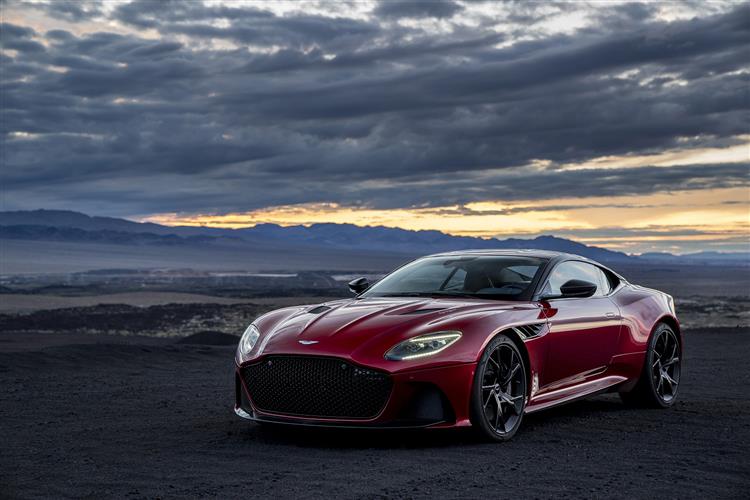