At last, Citroen can offer a credible but properly distinctive family hatch. Jonathan Crouch takes a look at the third generation C4.

This third generation C4 is a far more creditable offering for Citroen in the family hatchback sector. And, the French brand hopes, can play its part in rejuvenating this segment by integrating SUV style and the option of full electric power into traditional family hatch design. Plus there's a clever suspension system to make this contender feel really Citroen-esque.

"This car", says Citroen CEO Vincent Cobee, "is Citroen to the core", this third generation C4 model's task being to return the brand to credibility in the Focus and Golf-dominated family hatch sector. The last C4, launched in 2010, wasn't particularly Citroen and wasn't particular successful either, selling mainly on low price - and towards the end of its life not even on that. In 2017, Citroen tried to replace it with an evolved family hatch-orientated version of its C4 Cactus crossover, but that didn't work either. This third generation C4, launched in mid-2020, plugs plays the crossover card too in terms of some aspects of its visual appeal, but unlike with the outgoing C4 Cactus, in buying one, you won't feel you're being forced into an SUV rather against your will. Instead, this C4 plays to the things people tend to like about Citroen - innovative design, a distinctive feel and exemplary ride quality. Plus there's an all-electric e-C4 version too.

Citroen hopes that the way this car drives is what will sell it to you - or more specifically, the way this car rides. Like the outgoing C4 Cactus, it features a clever Progressive Hydraulic suspension set-up. Here, the car's springs and shock absorbers work in concert with hydraulic compression and rebound stops, which are supposed to slow body movement over bumps and tarmac tears. You'll want to know about the engines. There's the brand's usual PureTech 1.2-litre 3 cylinder petrol unit, available in three states of tune with 100, 130 or 155hp options. All variants will be front driven, with more powerful models available with an 8-speed auto gearbox. Citroen also offers its usual 1.5-litre BlueHDi diesel, available either with a 6-speed manual gearbox (in 110hp guise) or an 8-speed automatic (in 130hp form). New for the C4 range this time round is an all-electric version, the e-C4, which uses a 50kWh battery powering an electric motor and developing 135hp. It can make 62mph from rest in 9.7 seconds and go on to a top speed of 93mph, but the more important stat is this model's ability to cover a WLTP-rated range of 217 miles on a single charge. To boost this capability, the car can recover energy when decelerating or braking. And there are three drive modes - 'Eco', 'Normal' and 'Sport' - that can vary the level of engine power and the energy draw from the air conditioning to boost driving range. 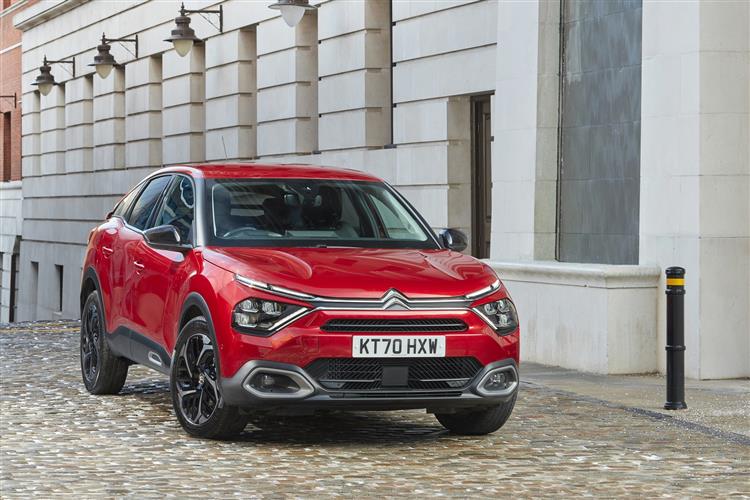