The Jazz Crosstar is intended by Honda to bring more of a lifestyle vibe to the Jazz supermini range and, like the standard model, gets a full hybrid engine. With the Crosstar, there's most of what you'd get with a small SUV - including a bit of extra ride height. But none of the crossover compromises you won't want to make if at heart you're still a supermini buyer.

These days, if you don't have exactly the right kind of SUV-style crossover model for every conceivable market segment, it seems you have to create one. This trend is perhaps most obvious at the smallest end of the crossover market. If your brand doesn't have a really small SUV model in the style of a Nissan Juke or a Volkswagen T-Cross, it's a potential problem. Which is why Ford had to jazz up its Fiesta supermini to create the Fiesta Active. And Audi felt the need to rugged-ise the A1 to create the A1 Citycarver. Honda is in much the same boat. For crossover buyers, it doesn't have anything smaller than the HR-V. Hence the reason why the brand's fourth generation Jazz supermini range includes the SUV-style Crosstar model we going to look at here. Changes over the standard car are fairly minimal, so there's the same full-hybrid engine under the bonnet and the same clever 'Magic seat' system inside. But this Crosstar variant will make much more of a statement on the school run.

Thanks to a 37mm increase in ride height, the Crosstar version of this Jazz should be able to offer increased suspension travel, but any benefit is difficult to sense on the road in comparison with the standard version. There are no mechanical changes over the ordinary car and there's no kind of front wheel grip control system either. Like all current Jazz models, this one comes only with one engine - the brand's e:HEV powertrain. This is a full-Hybrid unit - so it's properly electrified like a Toyota Yaris Hybrid, rather than being only mildly electrified like the MHEV unit you can now have in a Ford Fiesta. The difference is important because a full-Hybrid can have far more reliance on battery power, especially in urban conditions. In this case, it's a 1.5-litre unit putting out 109PS which uses two electric motors and a compact lithium-ion battery pack. The combustion engine sends drive through a clever fixed-gear auto transmission which Honda reckons is smoother and more efficient than the type of belt-driven CVT set-up the Jazz had before (and the one that Toyota uses in its hybrids). Basically the whole set-up is a downsized version of the 2.0-litre electrified engine used in the CR-V Hybrid and as there, you get various drive modes which the car selects for you. Most of the time at the wheel of this Honda you'll be in 'Hybrid Drive', which combines the engine and the battery pack in the most efficient way possible while recovering electricity from deceleration and storing it for future use. 'EV Drive' forces the Jazz to run in electric-only mode (though it can only do that for very short distances). And the 'Engine Drive' setting combines the petrol engine and the electric motor output for maximum performance. In this mode, the e:HEV powertrain gives this Jazz a 0-62mph time of 9.9 seconds and a maximum speed of 107mph. 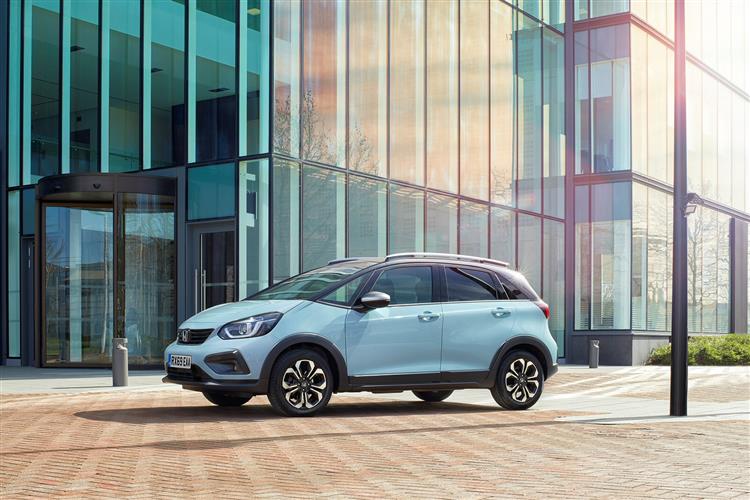