Vauxhall has reimagined what its little Mokka SUV can be. Jonathan Crouch drives it.

Vauxhall needs more of a competitive presence in the industry's fastest growing segment, that for small trendy SUVs. And, courtesy of PSA engineering, this second generation Mokka model provides it. There's nothing that changes the class norm here, but we can't remember a more visually appealing Vauxhall in recent memory - and that has to be a good thing.

Welcome to the fresh new face of Vauxhall, showcased here by the trendy so-called 'Vauxhall Visor' look of this second generation Mokka SUV. You might remember the Mokka, one of the earlier small crossovers, first introduced in 2012, then updated and relaunched as the Mokka X in 2016, which then petered out in 2019 as its place in the range became squeezed between the (smaller) Crossland X and the (larger) Grandland X. Like those two cars - but unlike the original Mokka - this MK2 design is based on the engineering of Vauxhall's French PSA parent group. That means it's basically the same underneath as a MK2 Peugeot 2008 or a DS 3 Crossback. Which in turn means that there's also a full-electric version, the Mokka-e.

No surprises beneath the bonnet. Not if, mindful of this car's PSA-sourced engineering, you're expecting a carry-over from the Peugeot 2008 anyway. If you're looking for a combustion engine, there are three choices - two petrol and a single diesel. The least powerful unit is a 1.2-litre turbo petrol powerplant with 100PS which is mated to a 6-speed manual gearbox. The same Puretech-sourced three cylinder unit can also be had with 130PS, in which guise you can optionally specify an 8-speed auto gearbox. If you're one of the few customers in this segment that still want a diesel, there's a 1.5-litre black pump-fuelled unit with 110PS that uses a 6-speed manual gearbox. Like the Peugeot 208 and the DS 3 Crossback, this Mokka sits on the PSA Group's latest CMP platform - which, incidentally, can't support a plug-in hybrid powertrain, so there'll be no competitor here to Renault's Captur PHEV. You can though, have a full-electric variant, the Mokka-e, which, like the Corsa-e and the Peugeot e-208, uses a 50kWh battery pack and a front-mounted electric motor which puts out 135PS and 260Nm of torque. Vauxhall claims the Mokka-e will be able to cover a WLTP-rated range of 209 miles on a single charge. 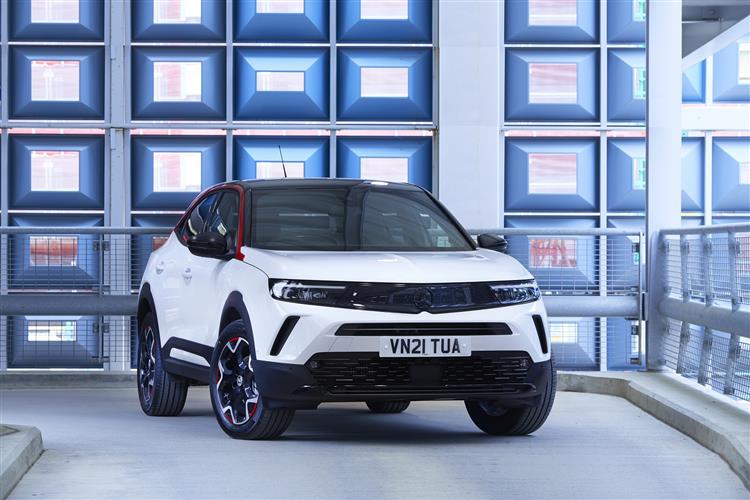