KING OF LEONS (some text hidden)

The CUPRA Leon is a force to be reckoned with, thinks Jonathan Crouch

The CUPRA Leon might not be the stand alone CUPRA hot hatch model we'd hoped for but it does offer a very appealing and satisfyingly sophisticated lower priced alternative to a fast Volkswagen Golf or Audi A3. This Spanish shopping rocket comes with a choice of conventional petrol turbo or PHEV powertrains.

For about as long as many of us care to remember, a SEAT Leon Cupra was a cheaper way to get into a Golf GTI. Okay, so you had to put up with an interior that was notably less attractive, but in the way it drove it was pretty much identical. Same engine and running gear, same great way it went up the road - you just paid less. These days, the Leon has stepped out from the long shadow cast by the Golf GTI and has got a bit Rafa Nadal on us. All bulging biceps and attitude, the CUPRA Leon has us all in a bit of a spin. In theory, it's a hot hatch from a fresh brand, CUPRA being a marque created by SEAT in 2018 for its sporting models. In practice though, this car functions as the flagship variant for the latest SEAT Leon range and can be had with either faster versions of that car's 2.0-litre TSI petrol turbo engine or a quicker tuned-up take on the e-Hybrid PHEV powertrain also familiar to Leon customers. So really, it's a Leon CUPRA, not a CUPRA Leon, but that's being pedantic. What's more important is what this car is like. And here, we're going to find out.

The Leon Cupra has some form line. There's never been a duff one and the latest CUPRA version of this Spanish hot hatch comes with real giant-killing ability. Various engines are on offer and in every case, you have to have your unit of choice linked to a 7-speed DSG twin clutch auto paddleshift gearbox. Most customers will be choosing either a hatch or an estate with one of two available (but very different) 245PS powertrains. There's a conventional 2.0 TSI petrol turbo unit. Or a clever 1.4-litre petrol/electric PHEV plug-in e-HYBRID engine which can travel up to 32 miles between charges and manages 62mph in 6.7s en route to 140mph. Think of these variants as alternatives to Volkswagen's Golf GTI and Golf GTE (all the same mechanicals feature). If you want your CUPRA Leon with even more zip, you'll need to get the conventional 2.0-litre TSI turbo unit in uprated tune - similar to the sort of thing you'd find in a Golf R. There are two options - a front-driven hatch model with 300PS. Or a '4Drive' 4x4 estate with 310PS which makes 62mph in 4.8s en route to 155mph. Whatever CUPRA Leon model you choose, it should handle well. SEAT's engineers have revamped the previous model's electric power steering system and say it's the 'most progressive feeling' rack they've ever delivered. The ride has been lowered by 25mm at the front and by 20mm at the rear over a standard Leon. Plus on most models there's a standard DCC adaptive damping system to vary ride quality based on your choice from a range of drive modes. Stopping power's taken care of by a larger set of Brembo 370mm disc brakes gripped by copper-coloured calipers. 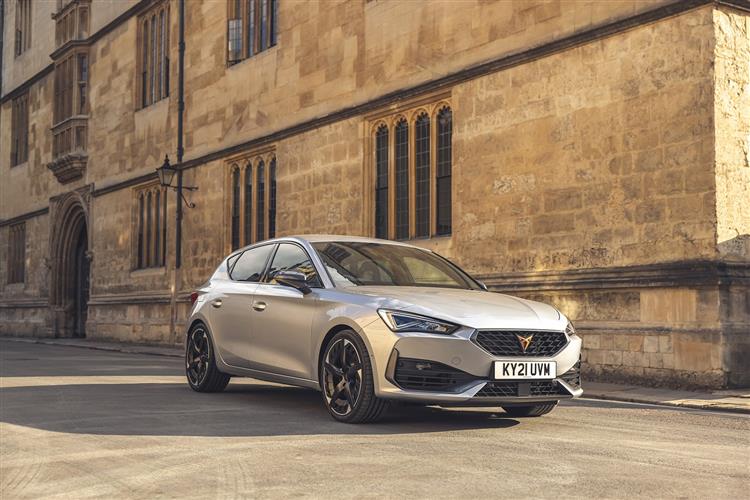