Hyundai's i30 N was Korea's very first really credible performance hot hatch and we loved it. Jonathan Crouch looks at the revised version.

With this i30 N hot hatch, Hyundai launched its 'N' performance sub-brand with the i30 N hot hatch, a model now usefully improved, primarily with a paddleshift auto gearbox option. The i30 N remains the kind of car you simply wouldn't expect from this Korean maker, with an output of up to 280PS intended to provide performance to embarrass this car's Volkswagen Golf GTI arch-rival.

Hyundai continues to get serious about performance. For proof, take a look at this i30 N hot hatch, now usefully improved and originally developed by a team led by former BMW M Power boss Albert Biermann. Before original launch, it underwent a lengthy testing period that included over 6,000 miles of running on the legendary Nurburgring Nordschleife racetrack and its aim continues to be to slot right in amongst the established players in the volume part of the family hatch-sized GTI segment. The 'N' in the model name stands not only for 'Nurburgring' but also for 'Namyang', Hyundai's vast research and development centre back in South Korea.

The main change here is the addition of something the original version of this car never offered, a paddleshift auto transmission, the sort of thing all this model's rivals have. Hence the addition here of an optional 'N DCT' 8-speed auto, equipped with three N performance functions: 'N Grin Shift', 'N Power Shift' and 'N Track Sense Shift'. We'd still be tempted though, to stay with the 6-speed manual which, as before, features a selectable rev-matching system to make you sound like Fernando Alonso when you're downshifting through the gears. Beneath the bonnet, you'll find much the same 2.0-litre turbocharged four-cylinder engine as before, developing 250PS in base form. The alternative 'Performance Pack' model gets a 5PS increase to 280PS, this top variant featuring the brand's 'N Corner Carving Differential', an Electronically Controlled Limited Slip Differential (eLSD). Additionally for the Performance Package, the front brake disc size has been increased from 345mm to 360mm for a better braking performance. The i30 N is still only offered in front-driven form - there's no sign of a 4WD option - and if you're quick with the 6-speed manual stick shift, 62mph in the 280PS model can be reached from rest in just 5.9s (0.2s faster than the 'Performance Pack' variant could manage before) en route to 155mph. As segment buyers will expect, 'Launch control' for 'Grand Prix'-style getaways features in the standard spec, plus there are five selectable driving modes and an electronically managed suspension set-up. An 'N button' will switch the car into its most dynamic setup and drivers can tailor settings through an 'N Custom' mode. A Performance Driving Data System is included on the centre dash screen to monitor and improve the driver's track skills, with updated graphics for even more ease of use. This feature saves and displays driving data, including information on PS, torque, turbo boost. It also includes a lap and acceleration timer, which comes in handy on the track. 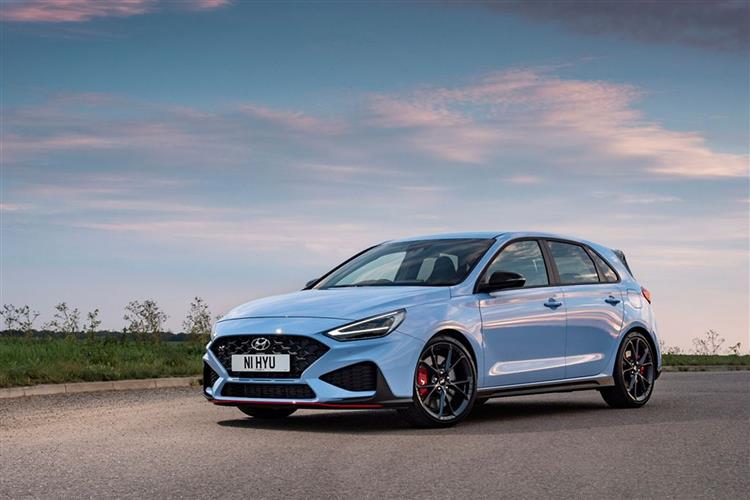