Hyundai's Santa Fe Plug-in Hybrid aims to combine the class and quality of an established brand large 7-seat 'D'-segment family SUV with an affordable package of cutting-edge Plug-in engine technology. A lofty ambition, but this car gets pretty close to pulling it off.

Think of Hyundai's Santa Fe, if you ever do, and you'll probably associate this large, 7-seat Korean SUV with a diesel engine. The sort of powerplant the brand has now consigned to history. Which might be confusing to you if you know this Asian manufacturer. Wasn't the fourth generation 'TM'-series Santa Fe, the model we have now, launched as recently as 2018 only with diesel power? Well yes it was. And yes, everything's changed. Either Hyundai has mis-read the market or its electrified engine tech wasn't quite ready but whatever the case, this MK4 design had to be fundamentally changed just two and a half years into its life cycle, reappearing in the Spring of 2021 in a form that could only be had with a 1.6-litre T-GDi electrified petrol engine. Either of the full-Hybrid HEV self-charging sort. Or with the PHEV Plug-in tech we look at here.

As the fairly rapid 8.8-second rest to 62mph time of this Plug-in variant illustrates, this PHEV Santa Fe feels like it has an engine of far bigger capacity than 1.6-litres beneath the bonnet. Even when it's running without the aid of combustion power, the car's 90PS electric motor does a reasonable job of powering it in battery motion mode. And when the 13.8kWh battery pack runs out of energy (which WLTP stats suggest will happen somewhere between 36 and 39 miles) and the 1.6-litre T-GDi turbo engine cuts in, the combined power output - 265PS - is more than enough for most safe overtakes, or pressing on when you're late for the school pick-up. You might wish for a bit more pulling power through the six speeds of the drivetrain's auto gearbox though; there's only 350Nm of it, which isn't a great deal to propel along a 2.1-tonne 7-seat family SUV. That's why towing capacity is limited to 1,500kgs. Hyundai has made sure that this car still retains a reasonably degree of 'off piste' capability though. Its standard 4WD system incorporates three bespoke 'Terrain' drive modes which you select from a provided dial - 'Snow', 'Mud' and 'Sand'. But there's not really enough ride height to venture anywhere too gnarly, so the 'Terrain' side of the drive mode dial will probably remain largely unused. More everyday useful settings come when a push of the same dial clicks you in to three separate tarmac 'Drive' modes that alter steering feel, throttle response and gear change timings. Most of the time, you'll leave the car in the 'Smart' setting, basically an auto mode that sorts everything out for you. There's also an 'Eco' mode. And a 'Sport' setting for when you want to push on, though you won't want to do that terribly often in this kind of high-sided SUV. 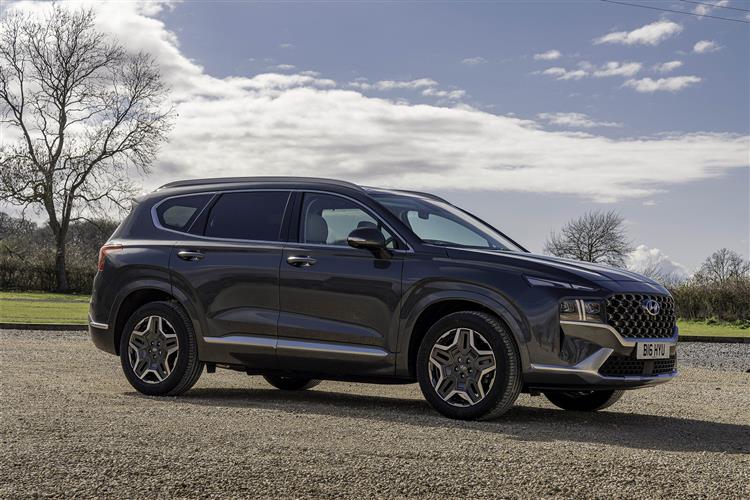