There's nothing quite like a Citroen Ami. Jonathan Crouch takes a look.

Citroen's Ami offers an urban mobility solution for our cities, its quadricycle format allowing it to be cheap, simple and fun. It's left hand drive-only, there's no boot, only two seats and it only goes 43 miles on each electric charge at a maximum of 28mph. But you might still enjoy driving one of these more than any car you've ever owned.

What on earth is this? An old school, quirky, individualistic Citroen. But this time, not a car. Though the Citroen Ami has 4 wheels and a motor, a steering wheel, pedals and a couple of seats, it's actually classified as a quadricycle. Which basically is an urban mobility solution, small, light, low powered and characterised in the past by models like the Renault Twizy and the Reva G-Whizz. The Ami is tiny, trendy and even available in 'Cargo' form as a tiny van. And because it was never originally intended to be sold here, is only being offered in left hand drive, though because it's so small, that hardly matters. Don't think of it as an alternative to a city car. Instead, it's a better seen as a nicer option than public transport. Or walking. And on the Continent, it can cost less to lease one than your monthly mobile phone contract. Interested yet?

It's electric of course. There wouldn't be much point if it wasn't. But it's got a far smaller battery (5.5kWh) than you'll find in any EV. Still, because the electric motor it's mated to develops only 8bhp, hence the feeble 20 mph top speed, you won't drain the cells very quickly and a (very achievable) range of 43 urban miles is possible. As you'd expect from the diminutive size, the turning circle is outstanding - just 7.2m. To give you a point of comparison, that of a base Fiesta is over 10m. A London taxi is rated at 7.6m. The elevated driving position and superb all-round visibility also help in the city and though there's no power steering to ease you into spaces, the vehicle is so light (that base Fiesta weighs a whopping 600kgss more) that it isn't really an issue. Still, you might well feel intimidated by trucks and buses, particularly as quadricycles like this don't get rigorously crash tested and don't have to have airbags and camera safety aids. 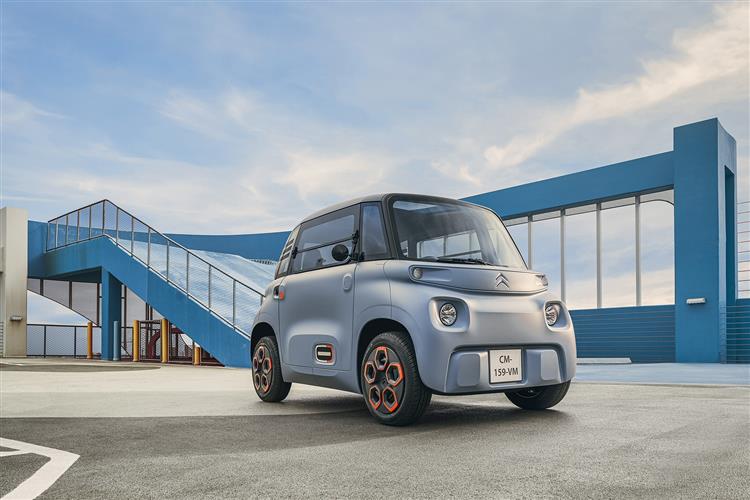