Can Volkswagen's improved Sharan continue to vie for top spot in the large MPV class? Jonathan Crouch takes a look.

Families ask a lot of their vehicles but few kinds of car can answer more of those questions than the large MPV. The Sharan is Volkswagen's idea of the ultimate big people carrier, with a variety of seating options and punchy yet economical engines. Sliding side doors enhance access and the seats themselves contort into a wide array of different layouts. This improved model gets extra connectivity. It's a car of its time.

When the original Volkswagen Sharan was launched in 1995, there were far fewer options for car buyers looking to carry seven passengers than there are today. As the Sharan MK1 aged gracefully, the market sector it called home was being nibbled away at by family-sized 4x4s, large estate cars and even smaller compact MPVs with an extra pair of seats positioned in the boot. It's reached the stage where those with a super-sized family have a wealth of choice at their disposal, ranging from van-based utility to all terrain ruggedness and executive luxury. This second generation model aimed to make a strong case for traditional large MPV motoring and it's been usefully enhanced with extra equipment that sees family buyers getting extra navigation technology.

The engine line-up opens with a 1.4-litre petrol, the idea of which might set alarm bells ringing in light of the Sharan's size and this unit's lack thereof. Fortunately, Volkswagen isn't offering this vast piece of automotive real estate with any old weak-willed 1.4. The powerplant in question is the Twincharger 1.4 TSI which generates 150PS with the aid of turbocharger and supercharger. Most owners though, will want a TDI diesel - and there are a couple of 2.0-litre choices, offering either 150 or 177PS. The 150PS variants come with manual gearboxes as standard but Volkswagen's DSG dual clutch automatic is available as an option and will make a lot of sense for many Sharan buyers, who have to have the auto with the 177PS derivatives. Anyone who tells you that a large-segment MPV is 'rewarding at the wheel' is either lying or being paid by the manufacturer concerned. This one though, is probably as nimble as it needs to be for its practical role in life. Yes, we'd like a bit more feedback from the steering but at least the car doesn't roll and wallow through the bends to the extent that a big van-based large MPV would do - Volkswagen's own Caravelle for example. 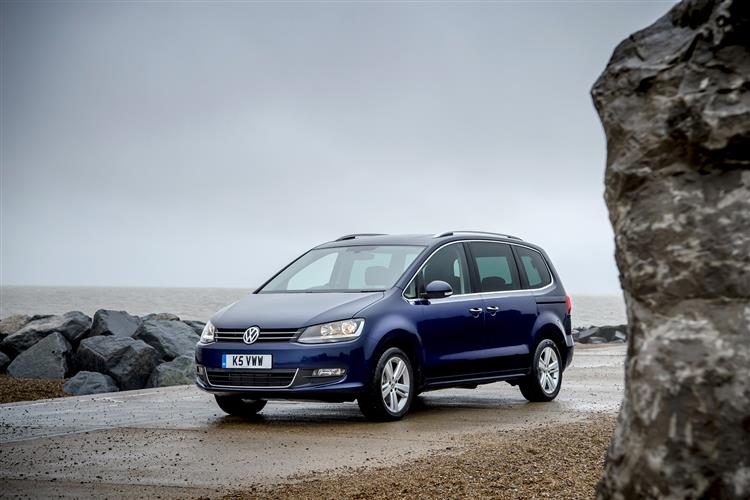