Toyota's Prius remains the most recognisable hybrid vehicle on our roads and has been much improved in this revised guise, principally with the option of 4WD. There are smarter looks too, a nicer interior, more equipment and extra safety kit. Otherwise, things are much as before, a clever hybrid powertrain delivering a set of efficiency returns that emphasise this car's superiority over comparably-priced diesel rivals.

Welcome to the car that in its first two decades of life re-shaped the global automotive landscape, bringing hybrid technology into the mainstream market, while focusing the motor industry's attention on the way its products could be cleaner and more efficient. Toyota's Prius did all that and in this rejuvenated MK4 model guise, aims to continue to set those standards, building upon quite a heritage of ingenuity. At its original launch in 2016, this MK4 model aimed to widen its appeal beyond enviro-conscious folk, hence a smoother drivetrain and extra interior space. Now it's improved its safety credentials and added in the option of 4WD. 'You look smart: you should drive a Prius', Toyota's advertising tells us and around the globe, millions of drivers are doing just that.

Hybrids are known to be much heavier than traditionally fuelled cars because of the big pile of battery-cells that provide the electric power. What is crucial to handling though, is where the extra weight is positioned. Toyota's modular architecture allows the centre of gravity to be lower and closer to the middle of the Prius, which translates into a better balanced ride for passengers but not a car you would ever describe as 'sporty'. It takes a fraction longer to get going than you might expect. The nickel-metal hydride battery pack gets the electric motor turning first and only when the Prius starts to pick up speed does the familiar 1.8-litre petrol engine fire up and seamlessly take over, allowing 62mph to be reached in a respectable 10.6s. The engine can be switched off if you need to run entirely on batteries, say, through Central London's Ultra Low Emissions zone. You can run on batteries more much longer with the pricier Plug-in version of this design, but that's not our focus here. The big news with this revised model is the option further up the range of AWD. This set-up uses an additional, independent rear electric motor to automatically activate the rear wheels to help those at the front when pulling away, or when low-grip conditions are detected. At higher speeds - between 6 and 44mph - the 'AWD-i' set-up also comes into play, transferring torque to the rear axle when sensors detect a loss of grip. 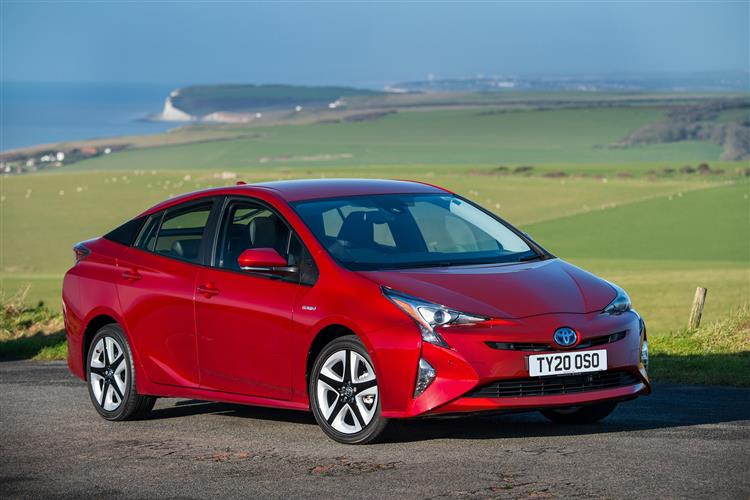