The Volvo XC70 has quietly become one of the staples of the Swedish manufacturer's range. In many ways, it's become the inheritor of the classic Volvo estate mantle, despite being saddled with some dubious lifestyle marketing. If you want a sold Volvo estate that will do the business whatever the weather, then the second generation XC70 model we look at here is the default choice. Here's what to look for when tracking one down used.

The genes of the XC70 can be traced back through the V70 Cross Country right back to the V70 XC, originally launched in April 1999. Although many credit Audi with introducing the concept of the premium 4x4 lifestyle estate, history shows that Volvo beat its German rival to the punch by a year. The Swedes certainly made that experience count with the 2007 car. It was initially launched with a choice of either a very thirsty 3.2-litre T6 238PS petrol engine or the more popular 185PS D5 diesel powerplant, displacing 2.4 litres. Trim levels ran SE, SE Sport and SE Lux with prices opening at £31,035. It didn't take long for Volvo to start tinkering with the product though. In May 2008, the XC70 got a number of equipment upgrades, with the SE Lux specification getting Active Bending Lights, heated washer nozzles, Load Compensating Suspension and chronograph instrument dials. In February 2009, the engine range got a tweak with the D5 powerplant getting a boost to 205PS whilst at the same time its CO2 emissions were cut from 199 to 185g/km. A 2.4D front-wheel drive model was also introduced under its green DRIVe banner, boasting CO2 figures of 159g/km. Early 2009 also saw Volvo tinker with the styling a little, with a new front grille displaying the large iron mark and new steering wheel chrome highlights and chrome trim around the ignition area. Cars with the D5 and T6 engines also got visible twin rear exhaust pipes as standard. Fast forward to May 2011 and Volvo introduced a new naming strategy for its cars and a new engine for the XC70. All engines were now badged depending on the power output. There were three engines in the new five-cylinder two-litre diesel family; a 150PS D2 (badged 'DRIVe'), a 163 PS D3 and a 177PS D4. The XC70 only got one of these; the D3 in front-wheel drive configuration, sold alongside the all-wheel drive 205PS D5 and 304PS petrol T6. The D5 was next to get worked on, Volvo dropping CO2 to as little as 149g/km.

What You Getword count: 223

The styling is probably the ace in the XC70's hole. Where the Audi A6 allroad became more restrained, the XC70 opts for a beefier, more macho look and it suits it very well. As well as the scratchproof protective cladding along the car's flanks and arches, there are chunkier front bumpers, blacked out side pillars and C30-inspired tail lights. The windscreen and tailgate are raked but the emphasis remains on serious carrying capacity. It's still extremely space-efficient with a class-competitive 485-litres of fresh air back there and a massive 1,641-litres can be liberated if you fold the rear seats down and stack your cargo to the roofline. You'll also find luggage nets and hooks to help secure any items with wayward tendencies. The car's designers cleverly decreased the amount the side glass curves from front to rear, for maximum style at the driving end and maximum carrying ability at the business end. XC-embossed roof rails are a standard fit and the contrasting colour of the front foglight surrounds give the XC70 a mean squint. Front and rear crash plates leave onlookers in no doubt as to this car's dual purpose role. This being Volvo, every V70 comes with a comprehensive array of safety equipment including the excellent WHIPS whiplash protection system and traction control. There's obviously ABS along with numerous airbags as well. 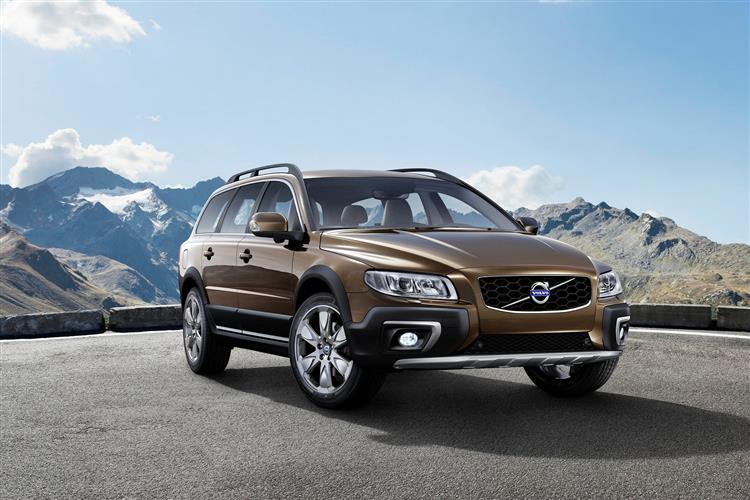