When the definitive automotive history of the 20th Century is written, the Lotus Elise will be worthy of a lengthy footnote. Although the original Series I car was the version that broke new ground, the Series II is a more accomplished proposition. Better built, prettier and an even better handler, the Series II Elise is an attractive used target. Here's the lowdown on this king of light entertainment.

When it was first launched back in August 1996 as an entry-level model to a range which at that point consisted solely of the ageing Esprit, few realised quite what a landmark sports car the Elise would become, especially as it followed hot on the heels of the commercial flop that was the Elan. Using a Rover 1.8-litre four-cylinder K Series engine, it was made of glass fibre and was fitted as standard with a soft-topped targa roof. The chassis was made of bonded aluminium, and the Elise was only available with a five-speed manual gearbox. The back to basics approach was an instant hit and for the next five years across a wide range of subtly different versions, the Elise racked up some very respectable sales. An all-new Series 2 Elise line up was announced for the 2001 model year with sleeker styling and some modifications to the engine and suspension. The first major change for the second generation Elise came in summer 2002 when 111 and 111S models were introduced, both powered by a 156bhp version of the 1.8-litre K-series engine. A 190bhp track oriented version was also introduced alongside the Type 72, a special edition model that aped the JPS colour schemes of Seventies Lotus F1 cars. Although it had been offered as an upgrade kit to existing cars since February 2002, it wasn't until May 2003 that the punchy Sport 135R was offered as a model in its own right, giving customers a more affordable but no less capable trackday weapon. In 2009, the fuel economy and emissions of all the Elise models was improved. Series 3 models were annunced in late 2015.

What You Getword count: 347

The original philosophy was always wheels, engine, suspension, a driving position that almost sits you on the floor and a great deal of exposed aluminium and fresh air. Nothing fancy, no high-tech driving aids or luxury accoutrements. Anything that detracts from the driving experience was excised and everything else pared down to a skeletal dimension. To a certain extent the Elise Series II adhered to that credo but there were options available for those who wanted a few extras. A 111S model was also available including niceties such as carpet, a beefier stereo system and leather trim. Those who wanted a hard top and air conditioning on top saw the new price edging towards the cost of a Porsche Boxster. For oginal buyers, it was best to stick to the standard Elise 111 and revel in its purity. The Elise's chassis was unchanged in '111' form but a few minor modifications were wrought elsewhere. The eight-spoke alloy wheels are the most obvious eye catcher, but the tyres are still the same size. The same size as the standard Elise that is, as the rears are, in true Elise style, an inch bigger in diameter than the fronts. A neat rear diffuser sits beneath the twin exhausts and this is probably the view that many drivers will get when they challenge a 111 to a stoplight grand prix. The 111 shares the redesigned hood with the rest of standard car. Stopping short of the roll bar it no longer resembles an ill-fitting toupee and looks far better integrated. Practicality is something of a token afterthought. There's a narrow space behind the front seats, and a tiny boot, but that's about it. Entry and exit from the Elise requires a fair degree of suppleness, especially with the hood up, and will deter any female occupants from wearing a skirt. Even Lotus test drivers look like they're trying to effect a sneaky exit from a curry house toilet window when getting out of an Elise. Best to leave the hood off, the windows down and just step over the door. 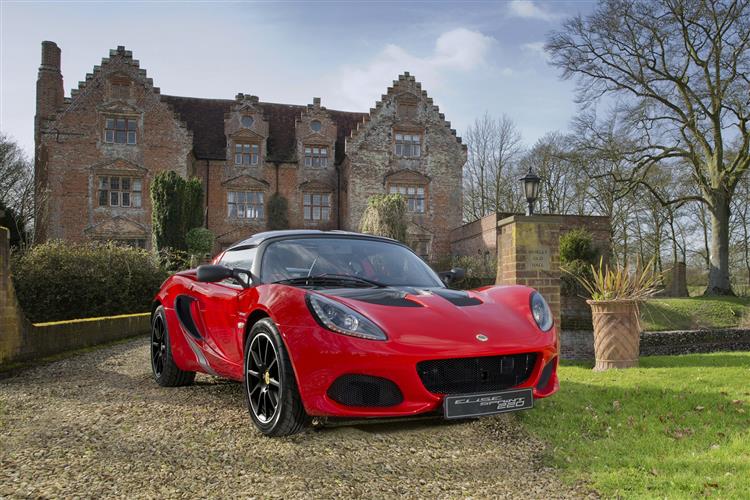