TOYOTA'S ACE UP ITS SLEEVE (some text hidden)

Given that most light commercial vehicles are built to a template when it comes to size and indeed pricing, there has to be something that differentiates them. Why is one successful where another one falls by the wayside? To get an insight into the solution to that question, one need only look at Toyota's massively successful Hiace, the biggest selling van of its type around the world. The attribute that's shifting so many of these vans? Reliability. Simple, honest to goodness reliability. The Hiace isn't the best looking van you can buy nor is it necessarily the best equipped, but for people who just cannot afford down days when their commercial vehicle goes lame, the Toyota Hiace has become the prime pick. Here's what to look for when buying used.

Though Toyota has been importing LCVs to these shores since 1972, its range of light commercials has traditionally been limited to the Hilux pick-up and this Hiace van, launched in the fifth generation form we're looking at here back in 2004 and facelifted in 2009. It's a van that has always had to play second fiddle in the UK to European-built tackle such as the Ford Transit and the Renault Trafic, but it nevertheless offers something a little different.

What You Getword count: 355

This isn't the prettiest or the most stylish van you're likely to come across, but then aesthetics don't tend to figure too highly on the wishlists of most LCV buyers. Toyota tried to smarten things up with a revised front grille in 2009 in a not especially convincing attempt to embolden the look of the front end. Still, it remains a neat, if not especially memorable design, though we'd like to have seen side rubbing strips provided along the flanks to protect against everyday scrapes and dents. Flip open the bonnet and you'll find that this Hiace boasts not one but two batteries, a useful feature given the drain on battery power imposed by some of the equipment operators use in their vans these days and the need for LCVs to start first time, every time whatever the conditions. Choosing a Hiace could hardly be simpler. The range starts with the '280 SWB', Toyota-speak for 'short wheelbase with a 2800kg gross vehicle weight'. This entry-level variant comes only with the lower-powered 94bhp D-4D diesel engine, badged 'D-4D 95'. The alternative is the '300 LWB', or in other words, 'long wheelbase with a 3000kg gross vehicle weight'. This model was offered with the 95bhp engine or the more powerful 115bhp D-4D diesel, badged 'D-4D 120'. Whichever variant you choose, standard equipment levels are good. All late model Hiace variants include air conditioning, power windows, electric heated mirrors, remote central locking, an MP3-compatible CD stereo, a height-adjustable driver's seat, a full-height glazed bulkhead and a sliding side door. Safety provision though, is limited to ABS braking and a driver's airbag. Retaining the 'keep it simple' approach, apart from usual items like front foglamps, a roofrack and a tow bar, there were only three real accessory options offered to original buyers of late model Hiace vans. The 'Professional Pack' included Bluetooth 'phone compatibility and rear parking sensors while the 'Metallic Package' ran to metallic paint, colour-coded bumpers and full wheel trims. That only left the last option of a full load area ply-lining kit. Check out in any given used example which of these the original buyer chose. 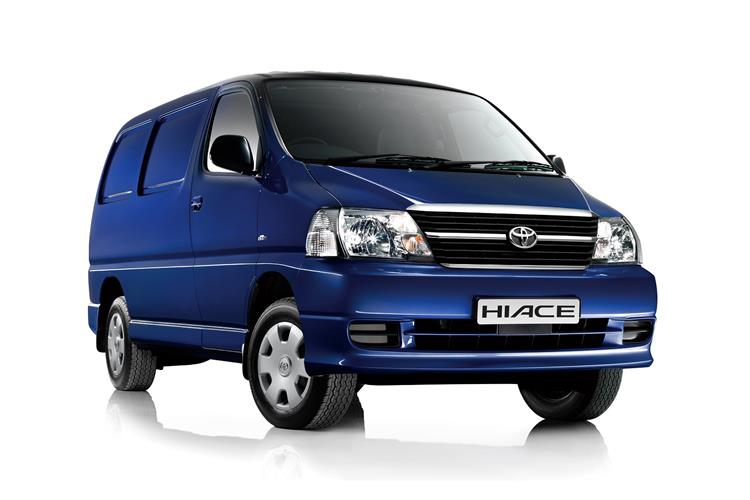