Hyundai have had quite a successful history of building coupes, yet they decided to do something different with the Veloster. Despite the dramatic looks suggesting impracticality, the Koreans had a trick up their sleeves. By giving the Veloster a third passenger door, they created a car that offered decent access to the rear seats without compromising style. Although relatively low sales figures led to Hyundai axing the Veloster at the tail end of 2014, owners have found it to be a reliable little head turner that boasts plenty of standard equipment and a surprising amount of practicality. If you like your coupes with a bit of muscle, there was even a turbocharged variant offering tighter handling and a lot more shove. With strong equipment levels, great reliability and reasonable economy, the Veloster could be something you'll buy with both your head and heart.

If you think of Hyundai as a budget brand, then you won't be expecting it to have much of a heritage in smart sports coupes. You'd be wrong actually. The Korean company first entered the affordable end of this segment way back in 1996 with a Hyundai Coupe model so appealing that it even out-sold rival Italian competitors in their home market. After a best-forgotten facelift in 1999, an even prettier new generation Coupe model arrived in 2002, selling steadily until production ended just before 2010. The designers took their time over its replacement, finally launched here in the Autumn of 2011. It would, we were warned, be just that little bit different - and so it was. Meet the Veloster. It's a car with a USP rather easy to spot. The so-called '2+1' bodystyle, aiming to offer the looks of a racy coupe with the practicality of a family hatchback. Meeting this rather challenging design brief meant doing things with doors. So you've a single long one on the driver's side but a pair of shorter openings opposite, with a few deft styling tweaks to disguise the fact. Only MINI's Clubman has tried this in the past and then only half-heartedly with a driver's-side rear side door that dumped its occupants into the roadway. In contrast, Hyundai's designers did the job properly, creating separate bodyshells for left and right hand drive markets so the extra doors would always be available to owners at the kerbside. Despite this clever combination, UK buyers never really warmed to the Veloster. Hyundai UK announced they'd no longer sell it in December 2014.

Everywhere on the Veloster, you'll find signs of styling flourish - a grille here, a slash there, with lines, curves, cutaways and slopes busily converging into a surprisingly cohesive end result. From every angle, this car seems different: you certainly never tire of looking at it. Even the entry-level model comes complete with 17-inch alloy wheels, front foglamps, LED daytime running lights, auto headlamps, reverse parking sensors, a 7-inch TFT colour touchscreen, Bluetooth connectivity with voice recognition, a decent USB and MP3-compatible stereo with wheel-mounted controls and an aux-in point and climate control. Go for the Sport model and you also get larger alloys, black leather trim with heated front seats, cruise control, keyless entry and a large panoramic glass sunroof that looks good but will rob taller drivers of a bit of headroom. Boot space isn't bad, with minimal rear wheelarch intrusion and up to 440-litres available if you load up to the roof. You can extend the space available by pushing forward the 60/40 split-folding rear bench and with that flattened, you've up to 984-litres to play with. There weren't too many options available to original buyers, but some were tempted by the Media Pack, which includes satellite navigation, a reversing camera and a stereo that includes eight speakers, an amp and a sub woofer. Original buyers who chose the Veloster Sport model got a red leather interior with a choice of colour schemes. Safety-wise, this car achieved a 5-star Euro NCAP safety testing result. There are six airbags, anti-whiplash head restraints, plus the expected electronic driving aids for traction, braking and stability control to try and ensure that you'll never have to use them. 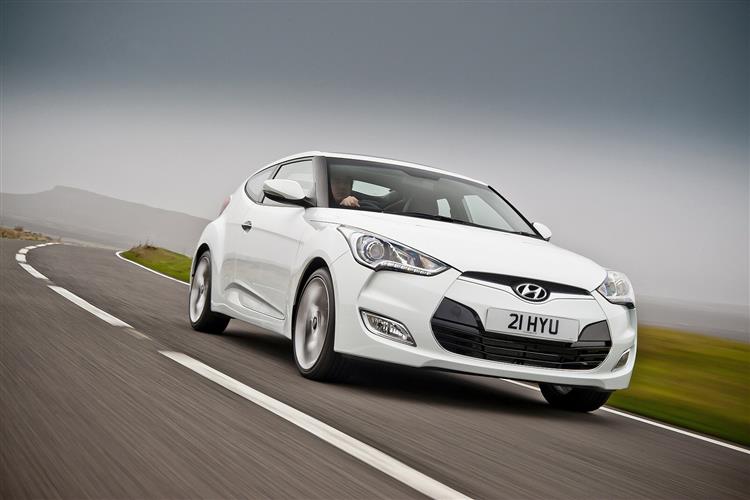