Subaru's mid-sized XV Crossover model looks a considerably better prospect in second generation 'GT'-series guise. It makes even better use of its capable Symmetrical permanent 4WD system to turn in an even stronger performance off road. And, more importantly, also delivers a far better showing on it, thanks to the more sophisticated chassis you get this time round. There's also a smarter interior, improved media connectivity and better standards of camera-driven safety kit than the previous MK1 'GP'-series XV model could offer. In this MK2 form, the XV was, in short, rejuvenated. Here, we look at the early 2017-2020-era versions from a used car perspective.

Want a used SUV Crossover from the 2018-2020 period? Lots of people do. If for you, the car in question needs to be family-sized, you'll probably find yourself looking in the Qashqai-class 'C'-segment where there's lots of choice, nearly all the options on offer essentially delivering a family hatchback with SUV attitude - but ultimately not much else. What if though, a car of this kind could offer a little substance as well as a lot of style? What if it could actually walk the walk off road as well as talk the talk on it? That'd be quite something. That'd be almost unique. And that's exactly what Subaru's second generation 'GT'-series XV, first launched in late 2017, claims to be designed to deliver. If you happen to be familiar with the original MK1 'GP'-series version of this model, then the styling here might suggest that a subtle evolution has taken place. Don't be fooled. In fact, this MK2 design was pretty much new from the ground up - the grounding point in question being a stiffer, more sophisticated Global Platform that Subaru apparently spent over a billion dollars developing for its mid-sized models, including the fifth generation Impreza family hatch that shares most of this XV's engineering. These underpinnings allowed the development team behind this car to deliver far higher standards in terms of on-tarmac ride, refinement and handling, all areas in which the original MK1 version of this car struggled. That earlier model was let down by its rather plasticky cabin too, so that was hugely upgraded for this MK" 'GT'-series design and embellished with a state-of-the-art infotainment system. And Subaru claimed Volvo-style standards of safety for this car, thanks to its included 'EyeSight' package of camera-driven safety systems. In addition, the engines were basically all-new from launch, both of them from this model's original introduction being conventional petrol-powered units and as standard, mated to the company's smooth Lineartronic automatic transmission. They were still both of Subaru's unique 'Boxer' configuration though - that didn't change. Nor did this model's solid, built-to-last feel. Or the fact that its off road capability was on a different level from most of its soft roading rivals. Which is what you'd expect from a manufacturer with expertise in SUVs dating back to 1995 and a company that today sees 87% of its European sales accounted for by cars of this kind. In fact, Subaru sells roughly twice as many four wheel drive vehicles as Jaguar-Land Rover worldwide, this one embellished with the brand's latest 'X-Mode' and Hill Descent Control systems. It's the sort of car that will have you praying for snow in the forecast. But is it one that would be as easy to live with as less capable competitors? Here we'll find out. In its original form with conventional engines, this MK2 XV sold until the end of 2020, with a 2.0-litre e-Boxer full-Hybrid petrol model replacing the conventional 2.0-litre petrol engine in Spring 2020. In early 2021, the range was lightly updated, the conventional 1.6-litre petrol engine deleted and the line-up exclusively focused on the 2.0-litre e-Boxer hybrid unit. It's the 2017-2020-era pre-facelift MK2 XV models however, that we look at here.

What You Getword count: 604

Subaru must have received some very positive ownership feedback on the styling of the original 'GP'-series version of this XV because it didn't fundamentally change the look of this second generation 'GT'-series model very much at all. As before, the basic shape is a fairly faithful representation of the Crossover norm, but it's got a purposeful, chunky stance, a tough robust demeanour and some very interesting details. That's all hugely important - and so are the changes that Subaru made to this XV inside. Let's be frank: the cabin of the previous version of this model felt pretty down-market for such a relatively expensive crossover. This interior might not immediately bring to mind premium brand standards of quality - some of the switchgear's still a bit cheap-looking - but overall, it's a huge improvement. Especially if you've opted for the top 'SE Premium' trim level that includes supple leather upholstery with smart orange stitching that trims the centre stack, extends across the fascia and adorns the doors. Even lesser variants look quite smart, thanks to copious use of soft-touch plastic and nice touches like a silver mid-level trimming strip that extends into carbonfibre-style panels around the door pulls. Someone at Subaru finally realised here that the showroom interior experience a car can offer is just as vital to selling it as any engineering technology it might have. Perhaps the most important development though, lay with the changes made to the centre-dash infotainment screen, which sits higher up the fascia than before and grew in size to 8-inches while using a far classier user interface and incorporating smartphone mirroring for 'Android Auto' as well as 'Apple CarPlay'. Accessibility to the back is helped by doors that open wider than those fitted to many competitor models. Once inside, Subaru talks of room for three adults, but the high centre transmission tunnel will make that difficult to achieve on all but the shortest journeys. It'll be fine for three children though. If there are only two of you, then you'll be able to use the dual cup holders in the fold-down armrest. The XV's comparatively long wheelbase gives a decent amount of rear legroom, the space available helped by front seats that you can get your feet comfortably under. Headroom's fine too, even in a sunroof-equipped model, thanks to the fact that the lower ceiling necessary to incorporate the glass panel wasn't extended into the back. It's a bit disappointing that the back of the centre stowage compartment couldn't have been sculpted so as to incorporate storage and a power point. And it seems a bit mean to only offer a seat back pocket on the left hand side of the cabin. And out back? Well we'd hoped the fact that this MK2 model is 15mm longer and 20mm wider than its predecessor would have done something to improve levels of boot space that were previously rather cramped by class standards. Sadly not - the 385-litre luggage capacity figure isn't much different to what it was before. Most key competitors offer considerably more space than this. The small under-boot floor compartment doesn't yield much extra room, this lower space made possible by the fact that, rather disappointingly for such a capable Crossover, Subaru doesn't provide any sort of temporary spare wheel - just one of those fiddly tyre mobility kits. There's no 12v socket either, though you do get the usual bag hooks and tie-down points. If you push forward the 60/40 split-folding seatbacks, the load area revealed isn't totally flat, but it is as spacious as most owners will need it to be, 1,270-litres in size. 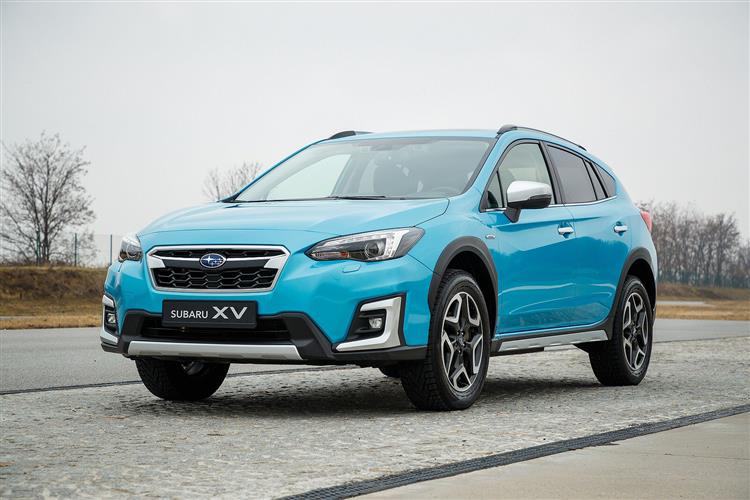