BELIEVING IN SANTA (some text hidden)

The Hyundai Santa Fe: now with that 'want one' feeling fitted as standard. Jonathan Crouch reports

Hyundai's Santa Fe has come a long way from the times when it was a budget brand SUV pick. These days, this model is the flagship of the Hyundai range, offering seven seats and European brand standards of technology and quality. This improved version of the fourth generation model ditches diesel in favour of electrified power powerplants. And it might well surprise you.

Look at a car like this, Hyundai's improved MK4 model Santa Fe SUV, and you get some idea of just how far this South Korean brand has come in recent years. This, after all, is the kind of quality product that has driven the improvements in its recent fortunes. The Santa Fe has had a big role to play here. Looking back, it was the launch of the MK2 version of this car in 2006 that really put Hyundai on the map. Not only was it beautifully built - it also had beautiful market positioning, this the first relatively affordable SUV to blur the boundaries between the mid-sized class and the large Crossover segment better suited to bigger families. Santa Fe buyers paid compact sector prices but got the kind of 7-seat capacity they'd previously needed a much larger SUV for. No wonder this car became such a strong seller for the UK importers. This time round, its smartened up its act, but the basic proposition remains much the same.

How an SUV drives is usually pretty far down the priority list after how it looks, what it costs and how much room there is inside. We used to take it as read that an SUV would be about as sharp as a serving of refried beans to drive but in recent years, we've seen the pendulum swing back the other way with 'sporty' 4x4s that cornered better but at the expense of decidedly brittle ride quality. There has to be a happy medium between these two extremes and Hyundai claims that this car rather neatly strikes it. To help with that objective, this fourth generation model was originally launched with an all-new platform, stiffer and more sophisticated than before, which helps to keep body roll in check. That's not enough to make the Santa Fe a particularly engaging drive though. With this updated model, the big news is that Hyundai has at last summoned up the courage to be able to ditch diesel. In place of the previous 2.2-litre CRDi unit, there's a choice of two petrol powerplants both based around a 1.6 T-GDi petrol powerplant starting point. Either a 245PS full hybrid unit offered with either 2DW or 4WD. Or a 265PS Plug-in version, which only comes with 4WD and can go up to 36 miles between charges. Either way, you get a 6-speed auto gearbox. The 4WD system in question is Hyundai's 'HTRAC' set-up, which apportions torque in varying quantities between the axles depending on the traction available, at the same time as braking individual wheels in search of better grip. 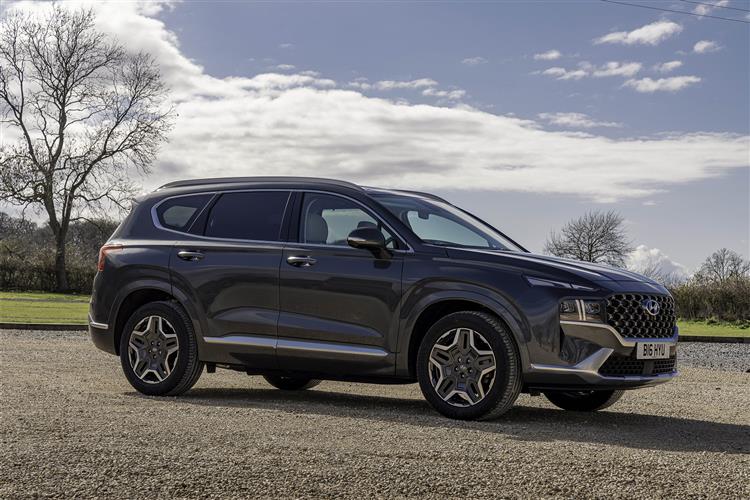