The fifth generation Renault Clio aims to return its maker to credibility in the supermini sector. Jonathan Crouch drives it.

This fifth generation Clio supermini is familiar, yet thoroughly different, returning Renault to a position of real credibility in the small car sector and offering the kind of complete package that could return this model line to its old position as one of Britain's favourites. Tougher segment competition has forced the French brand to up its game, particularly in terms of cabin technology, fit and finish, but we're impressed by the way the company has responded, ticking these boxes while also adding in greater practicality, extra safety, more sophisticated media technology and a sharper look. There's plenty to like here.

The Renault Clio. It's the definitive expression of this French brand's vast experience in the supermini class, building on the company's reputation for building compact cars that are characterful, fun to drive and technically accomplished - qualities that go back all the way to the famous Renault 4 and 5 models of old. Here's the latest, much improved fifth generation version. The last couple of decades have been characterised by a lack of investment from Renault in their key models as the company pursued an electrically-powered motoring future the market still isn't quite ready for. That changed with the development of this car. The marque knew it had to get this Clio right. Perhaps it has.

This MK5 Clio was the first Renault-Nissan Alliance model to use the conglomerate's latest sophisticated CMF-B platform. And the French brand has dramatically slimmed down the engine range you can have bolted to it. Gone are the diesels and the entry-level SCe petrol unit. Now, the only conventional powerplant you can have is Renault's 1.0-litre three cylinder TCe 90 petrol unit - which is the one most customers went for anyway. It only comes with manual transmission. The alternative is the self-charging E-TECH Hybrid 145 auto petrol version of this model, powered by an electrified 145hp petrol engine and two electric motors. Renault's set out here to try and deliver a driving experience to Clio buyers that's a little different to that served up before. Previous models had something of a comfort focus, but with this fifth generation design, the brand has sought to combine that with a little of the alert feel you'd get in this segment from cars like Ford's Fiesta. It'd be asking a little much for the company to nail this demanding brief at its first proper attempt, but it's got reasonably close. A little of what we might call 'Clio-ness' has been sacrificed in the process - this car no longer cruises over bumps with quite the ease of its predecessor. Most undulations though, are dispatched without fuss and there's a purpose to the way the car turns into bends and a level of body control that certainly wasn't there before. Plus of course in town, as you'd expect, it's manoeuvrable, nippy and easy to park. 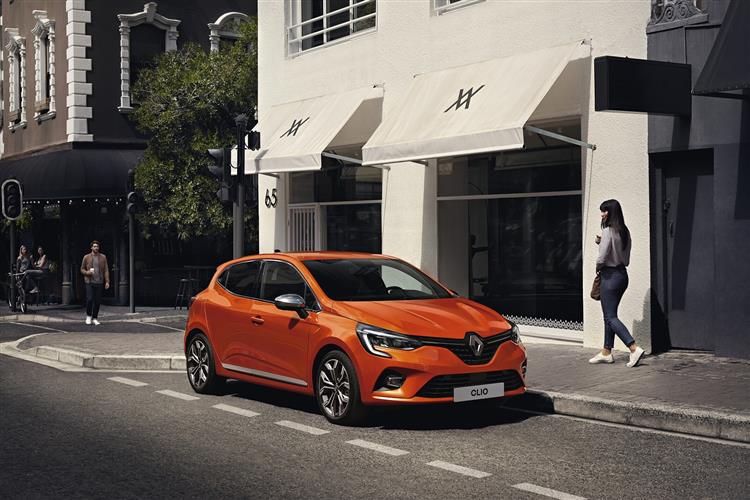