Tesla's Model S is the brand's original EV, an electric car with up to 405 miles of range, a model that can seat up to seven, has acceleration to demolish an Aston Martin and features zero tailpipe emissions. The car has now been updated with an all-new interior and there's now a choice of either 'Long Range' or 'Plaid' variants with 100kWh battery outputs. Either way, you get standard 'Dual Motor All Wheel Drive'. Here's what the future looks like - and it's cause for celebration.

What do electric cars say to you? For the most part, they're rather inoffensive city scoots. Get one out on the open road and they're often only about half an hour from leaving you stranded on the hard shoulder with no juice. That's the way electric cars have been developed by big car companies. Tesla isn't a big car company. It has never been rooted in the culture of the internal combustion engine, so perhaps it's understandable that when it sets out to build an electric vehicle, things are a bit different. Co-founded by Paypal creator, Elon Musk, Tesla has been committed from the word go to changing how we think about electric vehicles. The Model S may look like a relatively conventional luxury car but it's anything but. It's a car that has the power to fundamentally alter the status quo in this sector. Electric power isn't just for small cars. It works really well with big ones too.

What are the driving characteristics you'd look for in a big luxury car? We'd be looking for hushed refinement, a smooth step-off the line, instant acceleration as soon as you prod the throttle and the handling ability of a smaller car. The Tesla Model S delivers all of these things and more. The 2.2-tonne kerb weight hints at a rather portly demeanour but the Model S handles a good deal more sharply than you might imagine. The steering can be switched between three settings - Comfort, Normal and Sport - changing the weight of feel but not markedly adjusting the level of feedback. Ride quality is better than you'd expect from a vehicle running on 21-inch wheels. Air suspension is optional and worth having. As you'd expect from an EV, there's no gearbox as such, so power transfer is even smoother than the best automatic transmissions. That power comes courtesy of batteries developed by Panasonic which sit under the floor of the car, keeping the centre of gravity low, while the electric motor sits atop the rear axle. Tesla now only offers 100 kWh AWD variants of this car. There are two variants on offer, the 'Dual Motor All-Wheel Drive' model, which can offer a 405 miles WLTP rated driving range; and the top 'Plaid' version, where the driving range figure is WLTP-rated at 396 miles. Even with the standard 'Dual Motor All-Wheel Drive' version, sixty is just 3.1s away from rest, so you'll be looking at very rapid progress. The AWD system works with two electric motors, one sitting on the front axle, the other driving from the rear. With the power spread around the drivetrain, you've of course got the perfect recipe for AWD traction. The same AWD set-up is used by the insane flagship 'Plaid' variant. 'Insane' is a word we feel we have to use because it designates the most frantic of this top Tesla's three driving modes - the others being 'Normal' and 'Sport'. Go 'Insane' and 60mph is just 1.99s away from rest on the way to 200mph, courtesy of a 1,020hp combined power output. As advertised, there's nothing else with four or five seats that can get remotely close to this kind of pace. 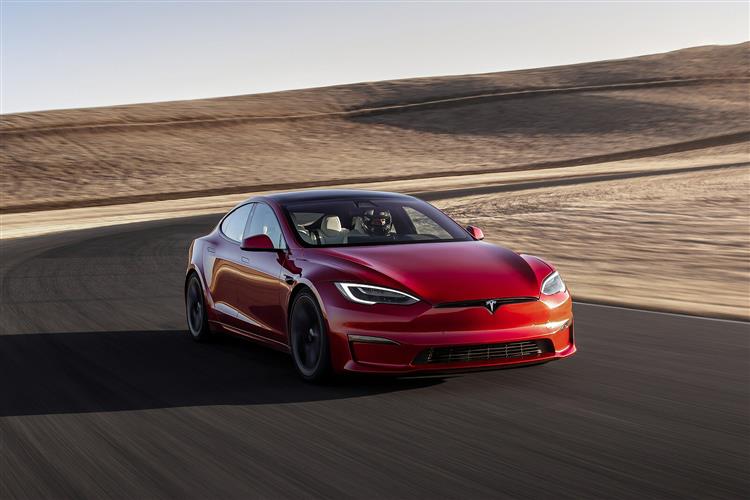