Want the ultimate hot hatch? Volkswagen's rejuvenated Golf R could well be it. This can't claim to be the fastest car of its kind but its Wolfsburg maker reckons it's the most complete, most rewarding and most dynamic shopping rocket yet made. Depending on your mood, it can reach 168mph on the racetrack or register better than 35mpg on the school run. Your everyday supercar is right here.

We've had the Golf R around in various forms since 2009 and the formula it offers hasn't fundamentally changed much in that time. There's VW's 2.0-litre TSI turbo petrol engine in its fastest form, 4MOTION 4WD and a slice of Golf GTI engineering tuned up to the max. This latest version, based on the current MK8 Golf architecture, doesn't deviate much from that script but does usefully embellish it. And of course, predictably, it claims to be the quickest and most powerful Golf ever made. That isn't enough to allow it to fully take on uber-fast super hatches like the Mercedes-AMG A 45 or the Audi RS3. But the Golf R significantly undercuts both these models on price and in real world point-to-point motoring probably isn't much slower. Plus a major draw is that its pavement presence is that bit more understated. You could get away with one of these in the company carpark without Directorship-level eyebrows being raised. Sounds tempting.

So to what you need to know here. The fourth generation 'Evo 4' version of this Volkswagen's EA888 2.0-litre TSI turbo petrol unit now puts out 320PS. Just as it does in the Tiguan R and Arteon R models that also use it. 62mph from rest occupies 4.7s (0.2s faster than the previous car could manage) and if you pay extra for the optional 'R-Performance upgrade' package, Volkswagen will remove the 155mph speed limiter so that 168mph is possible. All this motor's pulling power is available from just 2,100rpm. Power though, is nothing without control - and this Golf R has more of that. For the first time, power can be distributed not only between front and rear axles but also between the rear wheels. Thanks to a new torque vectoring system using a pair of electronically operated multi-disc clutches, output can be balanced across the rear axle from 0-100% within milliseconds. You're going to want that optional 'R-Performance' upgrade package because it includes two extra driving modes. 'Special' was configured for optimum performance at the legendary Nurburgring Nordschliefe race track (around which the latest car is apparently 17 seconds quicker than its predecessor). There's also 'Drift', configured for general wild racetrack use. Changes common to both Golf R variants include 10% stiffer springs, a 1.3-degree front axle camber change and steering software tweaked to be more direct. The brake discs are 17mm bigger and feature crisper pedal response. And the front aluminium subframe is 3kgs lighter. All good to know. 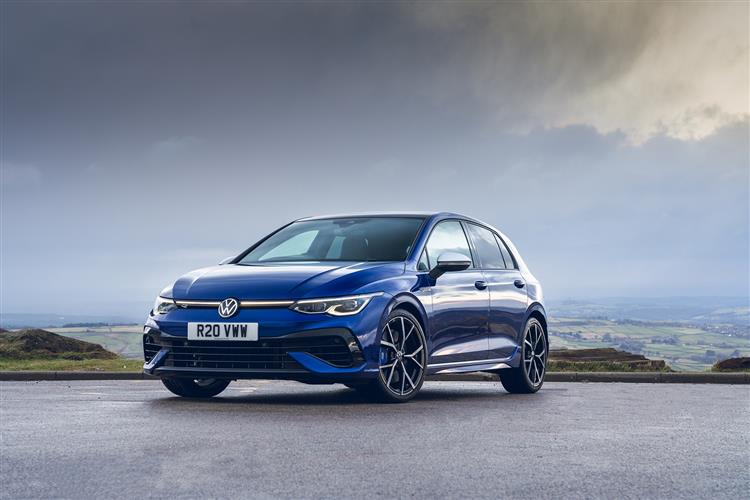