Porsche's Macan continues to be an SUV with the soul - and the engineering - or a sportscar. You might expect it to be fast and family-friendly. More of a surprise is that it's rewarding and, with the right spec, very nearly race-ready in its responses. Yet it'll comfortably take you off road, deal with the school run and cruise down to Chamonix. It's very special. Especially in this improved form.

With the Macan, Porsche was always determined to stretch design boundaries and create the ultimate multi-tasker. A car as ready for a circuit as it would be for a skiing trip, classy enough for the streets of Monte Carlo, soundly sensible on the school run, quietly capable on the rough stuff and potentially manic around Monza. The company's certainly well-placed to create such a thing, claiming the whole 'sporting all-wheel drive car' concept as its own invention. Back in 1900, Ferdinand Porsche designed the Lohner-Porsche racing model with its four electric wheelhub motors. By 1947, the brand was going further, developing a supercharged 12 cylinder 'Type 360' Cisitalia Grand Prix racer that introduced the concept of full four-wheel drive. What it all led to was the Cayenne large SUV that turned the company's fortunes around earlier this century. And from that to this Macan, a smaller SUV designed to sell alongside it, first launched back in 2014. This revised version, launched in mid-2018, then updated in mid-2021 to create the car we're going to look at here, looks smarter, ditches diesel and improves its technology.

It's an all-petrol range these days - it's some time now since Porsche offered a diesel in any of its cars. The brand's usual plug-in hybrid tech though, is conspicuous by its absence here. Whatever engine you select, there's more power on offer than before. Most buyers opt for the entry-level 2.0-litre turbo model, available in standard or more focused 'Macan T' forms, either way with 265PS: in this form, the car gets to 62mph in 6.2s and reaches 144mph flat out. If that really isn't fast enough for you, then there's a mid-range Macan S and Macan GTS models, which use an Audi-sourced 2.9-litre V6 unit, respectively with either 380 or 440PS. As before, all models come with a seven-speed PDK dual-clutch gearbox, with a Sport button to sharpen shift times, throttle response and steering. The GTS gets Sports air suspension which lowers the ride height by 10mm. Porsche says that the chassis has been further optimised for this updated model, so that the car should respond more directly and with greater sensitivity. It was already a handling leader in its class. As before, four-wheel drive is standard on all variants, although in normal road conditions, 100% of torque is directed to the rear axle. Should momentary slip be detected, a clutch pack locks, which can then send up to 100 per cent of torque to the front axle. There's also a torque vectoring system, while a torque vectoring rear differential is an option. There is a dedicated off-road mode, which optimises the torque split and gearbox shift points to better optimise grip and torque when it gets really slippery. Standard steel springs with passive dampers are standard on the S models, with adaptive dampers an option. 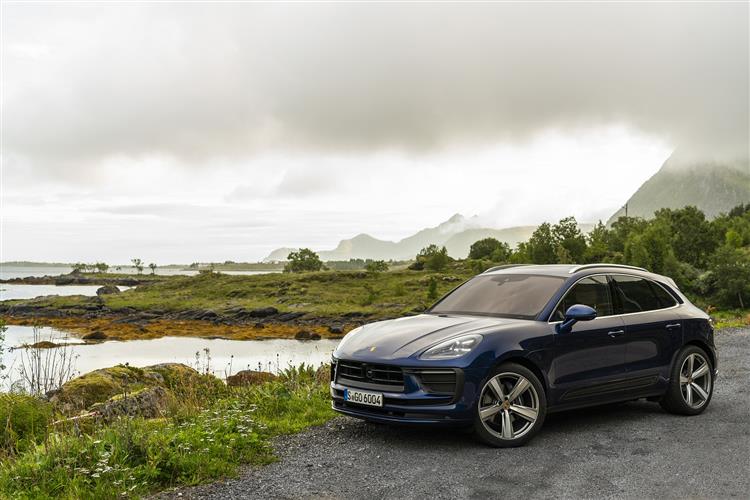