NO LONGER AN N-IGMA (some text hidden)

With its second generation NX, Lexus at last fields a properly class-competitive contender in the segment for mid-sized premium brand SUVs. Jonathan Crouch takes a look.

With this second generation NX, Lexus has brought us a strikingly styled premium mid-sized SUV that's unafraid to go its own way when it comes to cars of this kind. It's still one of the only models in its class that can't be ordered in diesel form, offering instead a beautifully refined and highly efficient petrol/electric hybrid powertrain, now available in PHEV Plug-in as well as self-charging forms. If you're choosing in this segment, most of the magazines will tell you to buy something German. But if this revitalised NX appeals, you may well feel that you know better. And you could be right.

At last, Lexus seems to have sorted out its SUV and drivetrain strategy. The brand has never had a properly-sized mid-shaped model similar in aspiration and shaping to key premium models like the Audi Q5 and the Mercedes GLC. The company's first generation NX crossover wasn't quite big enough to fill that role, but it was just a little too large and pricey to fill the compact premium SUV niche now taken by the smaller Lexus UX. This second generation NX, in contrast, is a direct Q5 and GLC rival, also taking on cars like the BMW X3 and the Jaguar F-PACE on equal terms. All of these models now offer a plug-in hybrid option, something no Lexus in history has ever provided. Well this second generation NX can give you that too - if you don't want its standard self-charging hybrid powertrain. In short, this car looks a rejuvenated proposition.

Most NX sales will be of the standard self-charging hybrid NX 350h model, which as before uses a 2.5-litre four-cylinder petrol electric engine. This car though, uses a re-engineered fourth generation hybrid system offering 241bhp (20% more power than the previous version of this engine could produce). As before, sales are focused across the range on AWD versions. The extra power means a 15% improvement in acceleration, so 62mph from rest in the 350h AWD takes 7.7s. Plus this MK2 NX will handle the turns better thanks to a stiffer body shell, a 20mm lower centre of gravity, better weight balance and increased track width at each end. Professional racing drivers were apparently used to tune the handling responses. This time round, there's also an alternative NX model, the NX 450h+ plug-in variant which uses the same PHEV powertrain we've already tested in the Toyota RAV4 and the Suzuki Across. Here, a 182bhp 2.5-litre normally aspirated four cylinder engine is paired with a 180bhp electric motor on the front axle and a further 54bhp motor on the rear axle. That means a total power output of 305bhp, channelled through permanent 4WD, with a 0-62mph time of just 6.3s. The motors are powered by an 18.1kWh battery which when fully charged has an electric driving range of up to 47 miles and can run at speeds of up to 83mph. 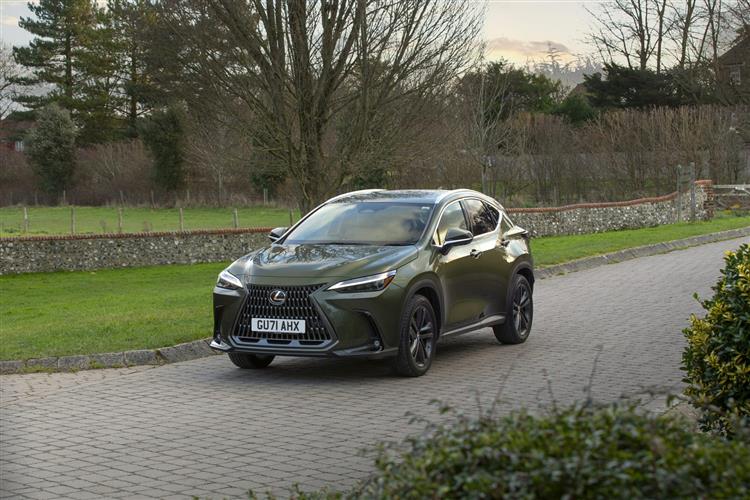