Skoda's fourth generation Fabia makes up in sense and practicality for anything it might lack in dynamic looks and pin-sharp handling. All the latest VW Group chassis technology has finally made it to this supermini model line and the result is a very complete product indeed.

Skoda's modern day renaissance can broadly be traced to one model, this one, the Fabia supermini. The design we look at here is the fourth generation version, building on a heritage stretching back to 1999 when the MK1 Fabia arrived to replace the old-fashioned Felicia model. That all seems very long time ago now. Today, the Skoda brand is so in tune with the times that the Volkswagen Group has chosen it to develop its forthcoming range of small electric cars. But for the time being anyway, in the Czech maker's line-up, there still a place for a conventional combustion supermini like the Fabia. This MK4 version is the last of the VW Group superminis to get the brand's MQB-A0 chassis, a platform that's already been in use in cars like Volkswagen's Polo, SEAT's Ibiza and Audi's A1 for half a generation. It was certainly needed for this Fabia, the previous car having been based on elderly PQ35 underpinnings dating all the way back to a turn-of-the-century MK5 Golf. It should make this fourth generation Fabia bigger. But has it made it better?

If you're looking for the fundamental changes made here, you won't find many of them beneath the bonnet. At the foot of the range, a normally aspirated three cylinder 1.0-litre MPI petrol unit mated to a 5-speed manual gearbox is offered for budget minded folk, offering either 65 or 85PS, but we'd avoid it unless you particularly need the cheap insurance ratings that come with that engine. As before, the range is mainly based around the usual VW Group 1.0-litre TSI three cylinder turbo petrol engine, offered as ever in 95 and 110PS states of tune. You get a six-speed manual gearbox with the 95PS version and a seven-speed DSG auto with the 110PS variant. There's no longer a diesel option, or any sort of fast vRS hot hatch model. But you can ask your dealer about a larger 1.5-litre TSI four-cylinder petrol unit with 150PS, paired non-negotiably with the DSG auto 'box. Expect roadgoing drive dynamics similar to those of the previous generation model - in other words, tuned for comfort rather than engaging handling. Skoda has made the damping noticeably softer than, say, SEAT Ibiza and more like a Volkswagen Polo, which shares this Czech model's conventional torsion beam rear suspension set-up. There are no mild hybrid or plug-in powertrain options - they'd push the price too much. 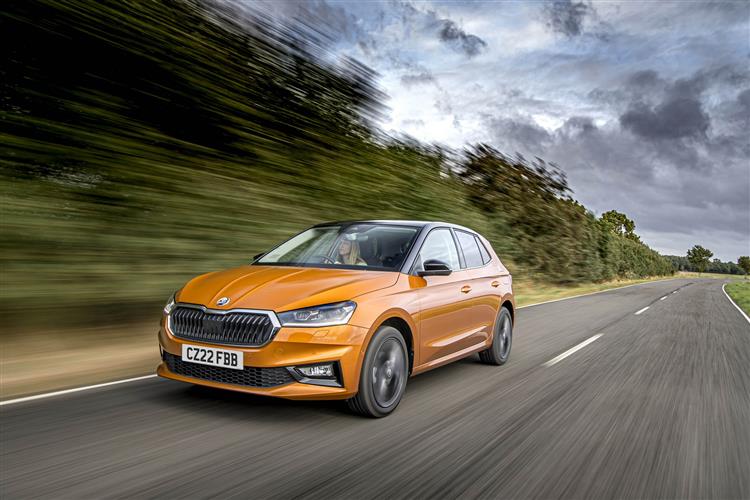