Jaguar's XE is much improved. Jonathan Crouch checks out the revised range with its electrified diesel technology

The Jaguar XE continues to deliver a slickly executed take on the mid-sized executive genre, offering something different to the usual German suspects in the BMW 3 Series / Audi A4-segment. On paper at least, this revised version with its mild hybrid diesel tech and improved connectivity seems to have the design, technology and ambition necessary to succeed in this segment, with the dynamics of a BMW and the luxury of a Mercedes, plus all the efficiency and connectivity modern business buyers now expect. It's a strong contender.

Think Jaguar and you probably think of unashamedly high-end cars, raffish, elegant and rapid. It's not a company that's given to lowering the bar and chasing volumes. It tried that in 2001 with the dismal X-TYPE, a rebodied Ford Mondeo that languished in the range for eight years, the public never really enamoured by a Ford wearing a pastiche of Jaguar styling. In its best-selling year, it sold half of Jaguar's initial 100,000 per year estimate, the Brits grumbling that here was a car they never wanted, hastily foisted on them by Ford's top brass in Detroit. It's took Browns Lane until 2014 to come back with a second stab at the mid-sized 3 Series / Audi A4-dominated executive saloon sector, but the XE showed that the brand had learned from the X-TYPE and done things rather differently. It was - and still is in this improved form - a serious contender to the likes of the BMW 3 Series, the Audi A4 and the Mercedes-Benz C-Class.

When you compete in the same class as the BMW 3 Series, it's a measure of real confidence to bill your contender as "the driver's car in the global mid-size saloon segment". Yet that's exactly what Jaguar has done and a closer look at the XE reveals the reasons behind their bullishness. The chassis is a 75 per cent aluminium monocoque, light but immensely strong. The design utilises a classically correct longitudinal engine and rear-wheel drive architecture. Jaguar reckons that this XE has the best electric power steering in class and there are plenty of chassis goodies like torque vectoring by braking. Automatic transmission is now non-negotiable and this revised XE is available with a choice of next generation Ingenium petrol and diesel engines. The 2.0-litre Ingenium petrol unit is only available in P300 AWD guise with 300PS. The P300 variant accelerates from 0-60 mph in just 5.4 seconds and uses its intelligent all-wheel drive system to good effect in slippery conditions. Most customers though, will probably opt for the single Ingenium diesel variant, now uprated and badged D200, which is rear-driven only, delivers 204PS and makes 60mph in just 5.6s. This D200 variant features the brand's latest mild hybrid engine tech. 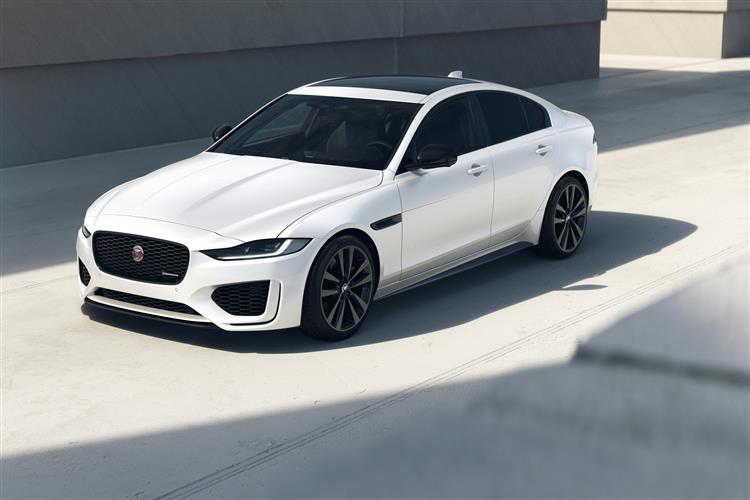