ACE IN THE HOLE (some text hidden)

The Proace is Toyota's medium range panel van and this second generation version is a very competitive proposition. Jonathan Crouch checks out what's on offer.

The Proace is the most credible medium-sized van Toyota has ever brought us, being comfortable to drive, practical to use and supremely efficient to run. Its development has come courtesy of a platform shared with rival products from Peugeot and Citroen, but Toyota has added its own feel to the finished product and completed the package with a uniquely comprehensive five year warranty. There's a full-electric option too.

Toyota is a company that loves a partnership. It commissioned Yamaha to develop many of its petrol engines, it joint-developed a sports car with Subaru, sold engines to Lotus and agreed fuel cell and electric vehicle technology with BMW. Perhaps then, it won't surprise you to learn that when the Japanese giant was looking to rejuvenate its position in the LCV sector, it decided not to strike out alone. Instead it agreed a partnership with PSA Peugeot Citroen and the Proace was born. The first generation version was a re-badged version of the Citroen Dispatch and the Peugeot Expert and was launched in 2013 towards the end of the model lives of both those designs. This MK2 Proace, launched in mid-2016, is a much more modern thing, still sharing most things with its French stablemates but featuring a lot more Toyota input in its design.

Conventional versions of the Proace come with a range of diesel engines: if your requirements are mainly based around lighter loads and short distance urban work, then the entry-level 100hp 1.5-litre diesel will be quite sufficient. For heavier payloads and longer journeys however, you'll be needing the 120hp 1.5-litre diesel model which also gives you a 6-speed gearbox in space of the feebler 1.6's 5-speeder. The power of this pokier version should be quite sufficient for most businesses. If you do feel the need for more power, then there's also a 120hp 2.0-litre diesel unit on offer packing a healthy 340Nm of torque. And above that, a 180hp version of the same engine, which has to be had with auto transmission. There's also the option of a BEV all-electric version, offered with a choice of 50kWh (range 142 miles) or 75kWh batteries (range 205 miles). Either way, drive comes via a 136bhp electric motor and there are three drive modes ('Eco', 'Normal' and 'Power'). There's also a battery recuperation mode. Whatever Proace you choose, the driving position, though not as lofty as in some models, nevertheless affords a decent view up the road and is comfortable on the move. That relaxed approach also extends to the electro-hydraulically-assisted power steering. You'll appreciate its lightness around town though, where this van is impressively manoeuvrable for its size, with a tight turning circle. The low stance and the big front overhang can initially make parking a bit tricky, though rearward vision is helped hugely by huge door mirrors with their separate wide-angle reflectors. 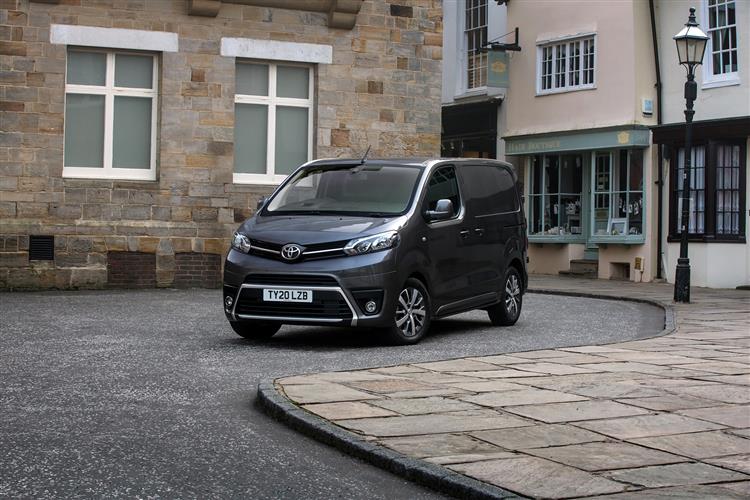