SWIFTLY DOES IT (some text hidden)

Suzuki's sixth generation Swift supermini has been improved. But not beyond recognition. Jonathan Crouch reports.

With this improved take on the sixth generation version of their Swift supermini, Suzuki have stayed true to the design principles that have long served them in the small car sector, low running costs, light weight and a spacious cabin being the highlights. The car is now better equipped too, plus its very efficient thanks to enhanced 12V mild hybrid technology.

Buying a car from a budget brand isn't usually something anyone does by choice. But the cost savings over more familiar options are often hard to ignore, especially when it comes to superminis. So what if you could pay budget brand prices, yet get mainstream quality? That's exactly the proposition this little Suzuki Swift has always aimed to serve up. Previous Swift models have certainly been convincing in this way, more than a million of them having been sold in Europe since 2005. This improved version of the MK6 model benefits from Suzuki's growing understanding of mild hybrid technology. Pair that with this model line's usual light weight and an efficient little supermini seems in prospect.

The Swift has always been quite entertaining to drive, mainly because of its relatively light weight; it still is. Engine-wise, the main change here is that Suzuki has standardised its 1.2-litre Dualjet mild hybrid petrol unit across all mainstream models. This 12V electrified powerplant was available previously, but this is an upgraded 'K12D' version of it, with a new fuel injection system that offers both more powerful response and higher fuel efficiency. This balance is made possible through advances that include an electric intake VVT (variable valve timing), along with a variable displacement oil pump and electric piston cooling jets. The powerplant's mild hybrid system now features a much bigger lithium-ion battery (increased in size from 3Ah to 10Ah). Engine output is 83PS, with a modest 107Nm of pulling power facilitating a 0-62mph time of 12.2s in the CVT auto variant (you can also have a manual). At the top of the Swift range, the Swift Sport hot hatch features a 1.4-litre Boosterjet mild hybrid unit with 129PS and a 48V electrified system. Both the 'SHVS' or 'Smart Hybrid Vehicle by Suzuki' mild hybrid engines work much as before; they can't ever power the car independently by battery (as a full-hybrid model like a Toyota Yaris or a Honda Jazz could), but the battery you do get under the driver's seat helps out in acceleration (around 50Nm of extra torque for up to 30 seconds) and powers the stop/start system. The SHVS set-up harvests kinetic energy when you brake and converts it into electrical energy. 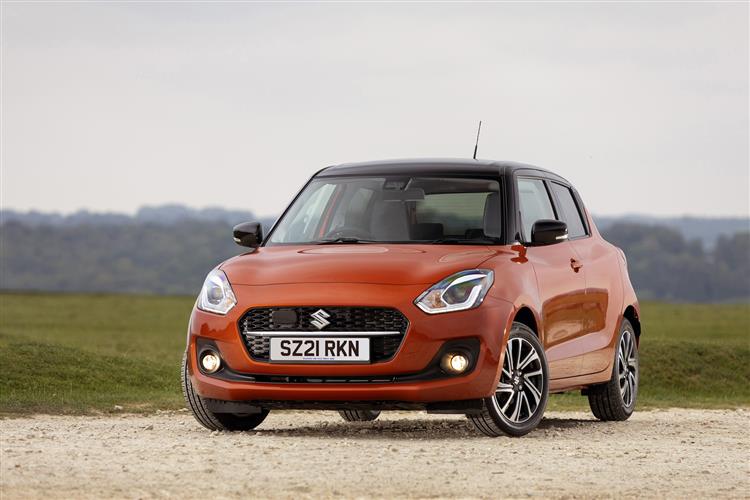