A STING IN THE TALE (some text hidden)

Yes, it's a Kia. Yes, you might want one. No, this 'Gran Turismo' model isn't merely a copy of something German. Welcome to the Kia Stinger, now usefully improved. The looks don't lie.

Back in 2017, we were offered a very different kind of Kia. The Stinger was a five-door performance GT that took on the German premium brands in the luxury sports Gran Turismo market. Since then, it's worked well as a rare but desirable halo model for the Korean brand and a respactable 10,000 global units have been sold. Enough to justify a facelift, which has brought us some useful updates. You get a smarter look of course, a slightly rortier engine note and a more up-to-date cabin with upgraded media connectivity. There are a few extra safety features too, though the range now is centred only on the top 3.3-litre V6-powered GT S variant.

With this revised Stinger model, the only engine choice is the flagship unit used in the original GT S version of this model, a potent twin-turbo 361bhp 3.3-litre V6 T-GDi powerplant. This now develops a fractionally higher output of 361bhp with 510Nm of torque, thanks to a new variable exhaust system that uses a butterfly valve to improve or soften the engine sound depending on drive mode. As a result, in the 'Sport' or 'Sport+' driving settings, the engine emits an exciting growl. 62mph from rest is dispatched in 4.7 seconds, so this is still the fastest-accelerating Kia ever sold in Europe. The top speed is 167mph. A little disappointingly, British customers still can't have the 4WD version of this model - that's still restricted to left hand drive markets - so an eight-speed automatic gearbox still drives the rear wheels, with five different shift and throttle programmes and the option of full manual control using the steering wheel-mounted paddles. The GT S has variable gear ratio steering and electronic suspension which can be set to one of five modes. As before, Kia has standardised a limited slip differential across the range for our market and this, in concert with a torque vectoring system that lightly brakes the inside front wheel at speed through fast corners, means that the Stinger is quite adept at overcoming its rather portly 1.8-tonne body weight and hurling itself from bend to bend, should you be inclined to drive it in such a fashion. As before, this car is almost everything you wouldn't expect a Kia to be. 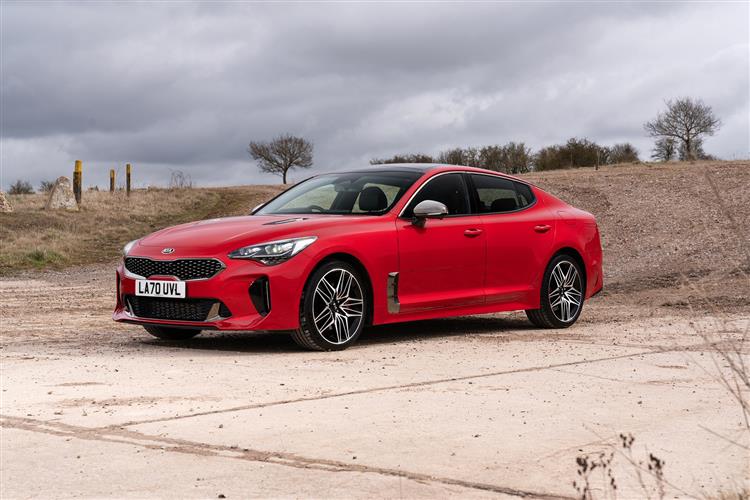