Volvo's compact XC40 SUV has delivered some new beginnings for the company. Jonathan Crouch drives and checks out the latest versions.

Volvo's XC40 is much more than just a smaller version of the brand's larger SUVs. It gets its own 'CMA' platform, a very distinct design to set itself apart and lots of potential for electrification. The result is a slightly unusual alternative to premium-branded compact SUVs like Audi's Q3 and the BMW X1. Here's the most recent lightly updated version, which offers combustion, mild hybrid, PHEV and full-EV options.

Volvo took its time in developing a contender for the industry's fastest-growing market segment, that for compact family hatchback-based SUVs. Back in 2017, the XC40 put that right. Since then, it's been usefully updated. Under the skin lies a bespoke 'Compact Modular Architecture' platform that Volvo created with its Chinese owner Geely. It's a chassis that will in future be used by a whole range of new compact Volvo models, but it's hard to believe that many of them will be much more significant than this one. Established premium brand compact SUV contenders like BMW's X1, Mercedes' GLA and Audi's Q3 are all within this XC40's sights. So it'll have to be good.

The XC40's 'CMA' platform has been based around provision for a whole range of future cutting-edge Volvo powerplants. All the combustion units now fuel from the green pump and the range starts with a three cylinder 1.5-litre engine used in 129hp form in the T2 model, the only variant in the range with manual transmission. The auto models most will want start with the B3 mild hybrid 163hp variant, which sits alongside a 197hp B4 mild hybrid model. That B4 variant also comes with the option of All-wheel drive. Want combustion-style electrification with your XC40? Well Volvo also offers a front-driven T4 Plug-in Hybrid XC40 Recharge model, which mates the three cylinder 1.5-litre engine with an 82hp electric motor. There's also a T5 Plug-in Hybrid that mates that electric motor with a 180hp version of the same engine. Both go up to 28 miles on a charge. If you need your XC40 to be fully battery-powered, There are two Pure Electric variants on offer, both of which use a 75kWh (usable) battery. The base front-driven single-motormodel offers 231hp. The alternative AWD model offers the twin electric motor set-up (one on each axle) that we've already seen on the top version of the extremely rapid Polestar 2 EV sports saloon. There's 408hp on tap (yes, you heard that right), which seems like it'd be rather excessive for the needs of most likely customers, sprinting you to 62mph from rest in just 4.7s with more torque than you'd get in a Nissan GT-R super sports car - 660Nm of it, at which point, the motor's spinning at a heady 14,000rpm. 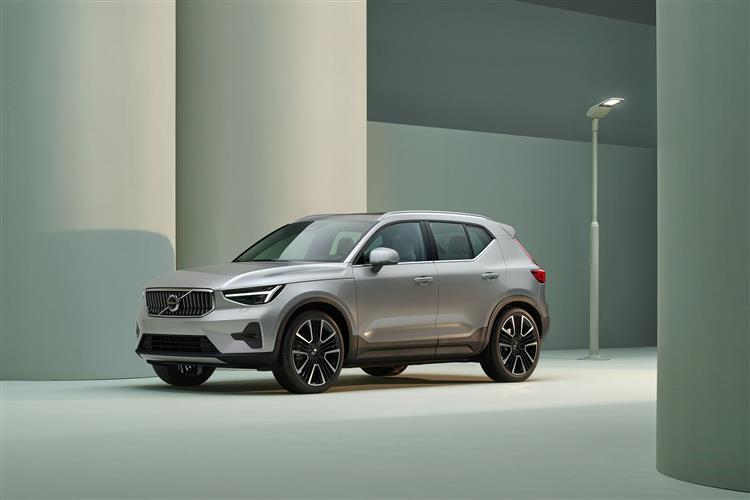