LEARNING THE BER-LINGO (some text hidden)

Citroen's third generation Berlingo van is bigger than you might expect - and more sophisticated. Jonathan Crouch reports on the revised version

Citroen's much improved third generation Berlingo remains one of the market's best selling compact vans, offering a usefully large payload capacity and a maximum load volume of up to 4.4m3. It's now been upgraded with some extra cabin tech, plus there are now all-electric and petrol versions if you want them. The idea is to rejuvenate this model's buying proposition and on paper at least, the prospects are promising.

Think of a compact but spacious van and it's really quite likely that you'll find yourself considering this one, Citroen's Berlingo. It's the kind of van you buy if your business needs a compact LCV that isn't quite as small as a modern cityvan-sector model would be - something like Citroen's own Nemo. Vehicles like that are based on superminis: Berlingo-type models, in contrast, sit upon the more spacious platforms originally developed for family hatchbacks or small MPVs. The platform in question in this MK3 Berlingo is the PSA Group's modern 'EMP2' chassis, which also now underpins two of this model's closest segment competitors, Peugeot's Partner and Vauxhall's Combo, both rivals that also share this Berlingo's engine range and much of its design technology. It's Citroen though, that has the most heritage in this sector. This was the first brand to introduce a diesel powered LCV, the first to launch a van with an integrated load area and the first to launch an LCV model with three seats in the cabin. Building on this strong heritage, this MK3 Berlingo Van marks the renewal of a best-seller.

This time round, the Berlingo van sits on the PSA Group's more sophisticated, lighter 'EMP2' platform and uses an efficient pair of diesel engines. Most opt for the usual BlueHDi 100 diesel variant, this base engine recently upgraded to Euro 6.3 guise, offering 102hp and featuring a 6-speed manual gearbox. There's also a 1.5-litre BlueHDi 130 powerplant; this top 130hp diesel powerplant comes only with EAT8 auto transmission. The brand also offers its PureTech 110 three cylinder 110hp petrol turbo engine. And there's the option of an all-electric e-Berlingo model, which features a 50kWh battery pack and a 136hp electric motor and is capable of up to 171 miles of WLTP-rated driving range from a single charge. Citroen reckons that this is the most comfort-orientated compact van you can buy, thanks to its 'Advanced Comfort programme' development. This is based around special cushioned seats, top-level acoustic treatment and special suspension settings designed to filter out bumps you'd really feel on rival models. Another clever touch is the 'Magic Wash' function that maintains visibility during window washing and halves the amount of liquid required. As before, a Grip Control option is available on some models to increase traction, incorporating hill-start assist. We like the new 'Flankguard' feature which informs the driver of the proximity of objects to the side of the manoeuvring vehicle by memorising the data recorded by sensors located in the front and rear bumpers, combined with the vehicle trajectory. 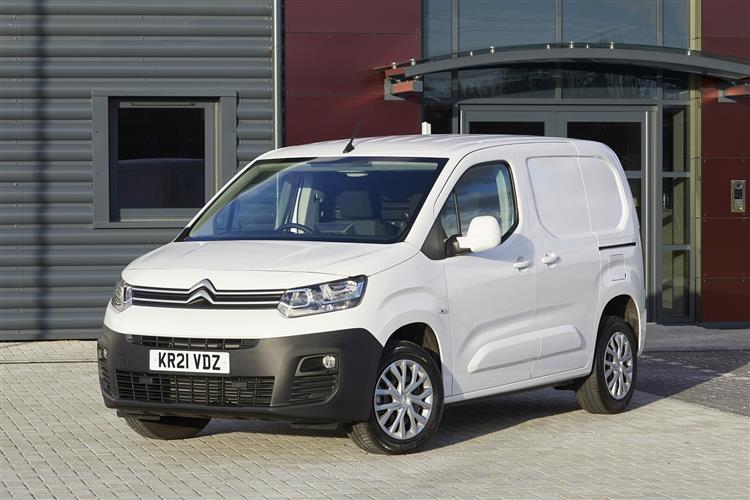