A PICK-UP FOR THE PEOPLE (some text hidden)

SsangYong's Musso pick-up aims to redefine the value proposition for customers in this segment and provide them with rugged but car-like transport. It's the only model in the sector tough enough to offer a seven year warranty and its combined payload and towing capacity is unmatched in the class. Now it's been further improved with a fresher look. And as before, there's the option of a long wheelbase 'Long-bed' 'Rhino' variant at the top of the range. If you're buying in this sector, you probably won't have been considering a Musso. Perhaps you should.

What do you want when buying a pick-up? Probably things like rugged practicality, load capacity, towing strength, reliability and cab space. Here's a contender you probably haven't considered that claims to be class-leading in many of these areas at the same time as being one of the most affordable pick-ups in its class to buy. This is the SsangYong Musso, now smartened for the latest model year.. Some background might be useful at this point. After all, since SsangYong pick-ups haven't so far made much headway in our market, you probably don't know much about them. The Korean brand first began to make headway in the pick-up segment with the 'Korando Sports' back in 2012, which was then updated and re-branded with 'Musso' badging in 2016. This current-era 'Q200'-series Musso model was launched in 2018, sharing all its engineering with the third generation version of SsangYong's Rexton luxury SUV (introduced just before). Here, we're looking at the lightly facelifted version of this Musso.

If you're used to driving pick-ups, there'll be one thing that'll immediately strike you as soon as you set off in a Musso. This model's exceptional refinement. SsangYong has put a huge amount of effort into improving this and it's really paid off, especially at higher highway speeds. On urban tarmac, refinement remains excellent but on poorer surfaces, you do start to notice a rather unyielding standard of ride quality. Some have criticised this but we prefer to take into account that this SsangYong offers the highest combined Gross Train Weight in the class. You don't get that without a fairly stiff suspension set-up - which in this case uses rear coils rather than the crude rear leaf springs that still feature in some rivals. Other pick-ups certainly deal with tarmac tears, speed humps and pot holes much better. But they can't carry a one-tonne payload at the same time as pulling along a 3.5-tonne trailer. It all comes down to priorities. What are yours? The figures we've just quoted refer to the automatic gearbox variant that most buyers will probably choose - it's a well-proven Aisin 6-speed package. A 6-speed manual gearbox is of course also available. Either way, the engine beneath the bonnet is the same - a 2.2-litre e-XDi220 SsangYong-developed diesel unit that puts out 181PS and 420Nm of torque. That's enough to breeze you past 60mph in about 11.3s in the manual (11.9s in the auto) on the way to a top speed that's rated at 115mph in the auto model - or 121mph in the manual. 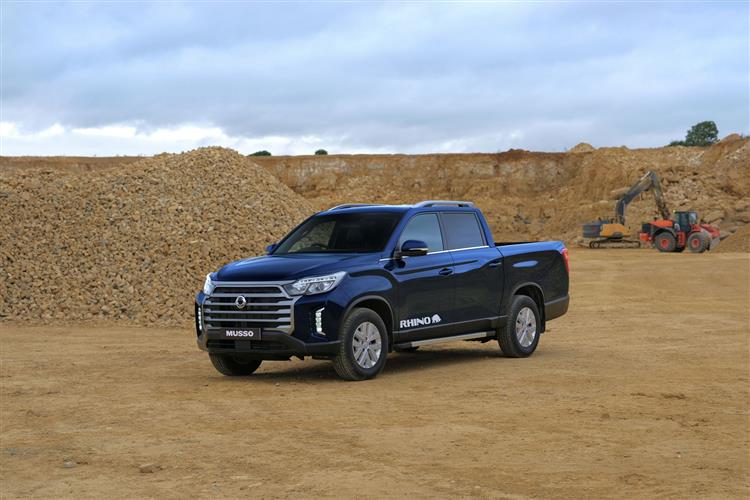