One of the market's most profitable segments at present is that for premium-branded mid-sized SUVs of the more compact sort. Lexus is a late-comer to this sector but in characteristic style, has brought something different to it in the form of this UX model.

The UX competes directly against cars like the Volvo XC40, the Jaguar E-PACE, the Audi Q3, the BMW X1 and the Mercedes GLA. The angular Lexus NX, which previously represented the company against rivals such as these, has been repositioned a little further up-market as an alternative to slightly larger medium-sized models (think Audi Q5s and BMW X3s). So, does the UX stand a chance against such an army of fiercely talented competitors? Well the looks are certainly a little different to what's on offer elsewhere in this sector - and so is the core powertrain, a non-Plug-in petrol/electric hybrid. There's also an alternative UX 300e battery full-electric version available if you want it. Lexus believes that over 80% of buyers will never have owned one of the company's products before. Will they like this one? Let's find out.

The UX was the first Lexus to be constructed using its brand's GA-C global architecture platform, which offers gains in torsional rigidity that enable this car to be far more nimble and driver-orientated than the company's previous compact model offering, the CT200h. The platform also enables the UX to have the lowest centre of gravity of any vehicle in its class. It's surprisingly light for a hybrid too, thanks to weight-saving measures in the body construction, including the use of lightweight aluminium for the side doors, wings and bonnet, as well as a resin material for the back door. The line-up's core model is the UX 250h petrol/electric self-charging (non-Plug-in) hybrid variant, a car which uses its brand's fourth generation hybrid electric system that features a redesigned 2.0-litre four-cylinder petrol engine and an electronic continuously variable transmission CVT auto transmission. It's available both with front-wheel drive and with Lexus's E-Four AWD system. The engine output is 176bhp, enough to take the car to 62mph in about 8.5s en route to around 110mph. In development, particular efforts were made to reduce any "rubber band" effect in the operation of the hybrid system and transmission, by optimising the level of electric motor assistance and engine rpm to generate a sense of linear acceleration without the engine running at high revs. The alternative version of this model is the all-electric UX 300e. This derivative's 54.3kWh lithium-ion battery generates plenty of power - 204hp, with 300Nm of almost instantly available torque which spears you away from rest like a hot hatch. 62mph from rest occupies 7.5s but top speed is limited to 100mph and you can use steering wheel paddleshifters to alter the level of braking regeneration. 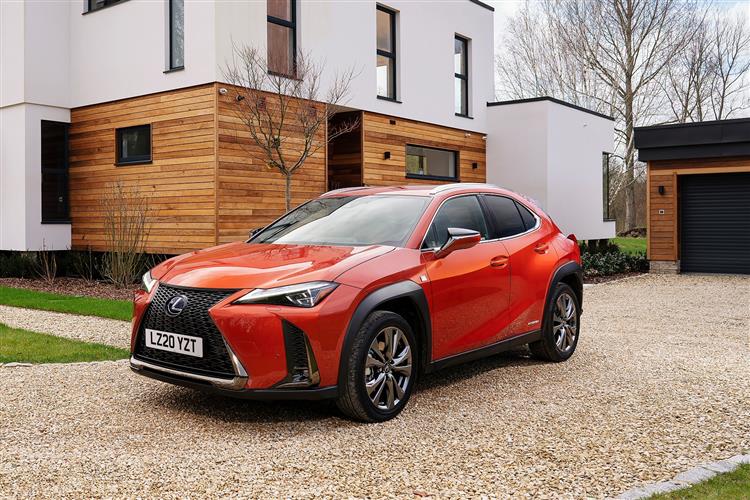