Toyota's Corolla has returned the brand to prominence in the family hatchback segment. Jonathan Crouch takes a drive in the latest version.

Toyota has returned the Corolla name to the family hatchback segment with a more class-competitive hybrid-focused model line-up of hatches, saloons and estates. If you'd previously dismissed the Japanese brand as an also-ran in the Focus class, it might be time to think again.

Toyota was aiming to enter fresh territory with this 12th generation Corolla. For one thing, it needed to make hybrids more universally acceptable in this segment - that's why there are two of them this time round, a 1.8 and a 2.0-litre unit, both of the 'self-charging' non-plug-in variety. This Corolla also aims to change customer perceptions of Toyota in this sector, which tend to centre around expectations of drab interior quality, forgettable looks and boring drive dynamics. This Corolla is a huge step forward from its Auris predecessor in all these areas. But will all that be enough to at last make this Japanese maker competitive at the sharp end of this class amongst Focuses and Golfs? There are three body styles this time round, a saloon variant joining the usual five-door hatch and 'Touring Sports' estate. All are built on the 'TNGA' 'Toyota New Global Architecture' platform and constructed at the brand's British factory in Burnaston, Derbyshire. Toyota also offers a Corolla Cross SUV, but that's a completely separate model.

This Corolla was the first of the brand's models in Europe to offer customers a choice of two hybrid powertrains - a revised 120bhp 1.8-litre system and a fresh 178bhp 2.0-litre unit that's engineered for more power on demand and more effortless acceleration, without compromising overall fuel and emissions efficiency. As full hybrids, both powertrains have the advantage of offering an all-electric drive capability, with zero emissions and fuel consumption. Both, as you would expect, are also matched to a seamless belt-driven CVT automatic transmission with six speeds. There are wheel-mounted paddleshifters supplied as part of this transmission package, but it's unlikely that typical buyers will make much use of them. For the record though, the 2.0-litre hybrid variant should get from rest to 62mph in around 8 seconds, which is reasonably rapid by class standards. Expect refinement to be excellent; certainly far better than it would be in a rival rumbly diesel. With the 1.8-litre variant we tried, the response to throttle input is slightly more linear than with previous Toyota hybrid models, though the disconnect between the accelerator pedal and the CVT auto gearbox can still be frustrating. The brand has worked hard on this 122hp electrified unit, equipping hatch and estate Corollas that use it with a lithium-ion battery that's smaller, lighter and can deliver more power to assist the engine thanks to improved recuperation capabilities. Whichever powerplant you prefer, you should find this Toyota far more dynamically able than its segment predecessors this time round. Throw the car into a corner and you'll find that though this Corolla is no Focus, it far from disgraces itself, with a decent level of front end grip and steering that's predictable and accurate, though rather light. 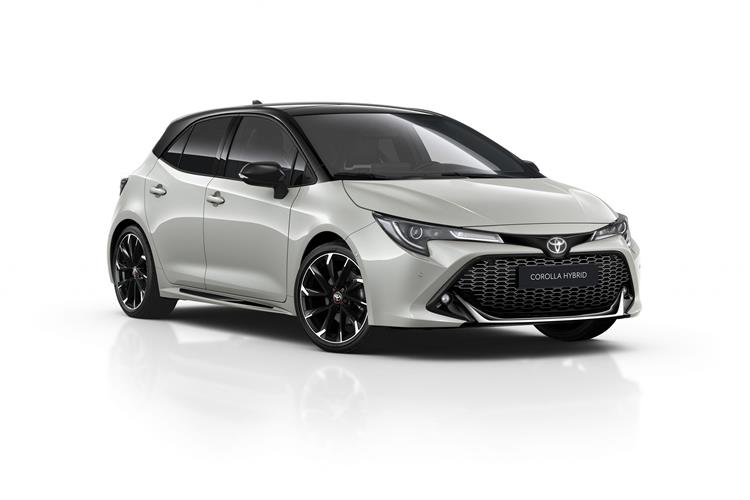