Volvo's MK3 model S60 saloon has the market's most elite mid-sized executive saloon models in its sights. If you're thinking of something 3 Series-sized, Jonathan Crouch thinks you should also consider an S60 too.

Sportier and more stylish, this more dynamic third generation S60 mid-sized sports saloon addresses the areas where previous Volvo executive cars have ultimately failed to deliver. It's engineered to be a far better driver's car than its predecessor and both quality and cabin design have taken a huge step forward. Plus it's the safest contender in its class. If you're looking for a change from your usual A4, 3 Series or C-Class, this S60's worth a look.

Does life really begin at sixty? If you're a potential Volvo owner, the answer may well be yes. The Swedish maker's third generation S60 saloon is, we're told, the most dynamic Volvo ever, both to look at and to drive, something of a departure for a brand that has built its reputation on substance and safety rather than style and sportiness. But then something pretty radical was needed to break the German stranglehold on the BMW 3 Series-dominated mid-sized executive market where this car must compete. This MK3 S60 has provided it. If in buying a Volvo, you expect all the design flair of a chartered accountancy firm, then this car will come as quite a shock, with sharp styling that sets it apart, both inside and out. The promise is that this will be matched with a greater emphasis on driver involvement than any model the company has produced in its history - a much harder thing to deliver. Particularly if, as we're promised, all this has been achieved without sacrificing the substance and safety part of the brand value proposition. Does it all add up? Let's see.

Volvos have tended to feel like the safe cars they are when you get them out on the road but with this MK3 S60, more emphasis than ever before has been placed on instilling some excitement. This third generation S60 design is the first Volvo car to be sold without a diesel offer, signalling the company's commitment to electrification and a long-term future beyond the traditional combustion engine. That's some way off yet though and for the time being, most S60 sales will be centred around the brand's usual conventional B5 mild hybrid petrol powerplant, which has a power output of 250hp channelled through 8-speed auto transmission. The B5 manages 62mph from rest in 6.7s en route to a maximum of 145mph. The alternative is to opt for the brand's Recharge plug-in technology. There's a top AWD variant of this car that uses that, the T8 AWD Plug-in Hybrid. This PHEV version uses a 310hp version of the 2.0-litre petrol engine, further boosted by a 145hp electric motor, this variant offering a 455hp total output and making 62mph from rest in just 4.6s on the way to the top speed that all Volvo models these days share of 112mph. All-electric driving range is rated at between 31.1 and 55.9 miles. Whatever powerplant you choose in this Volvo, you'll find it has a very laid-back demeanour - which is apparently entirely intentional. The Swedish brand reckons that many rival models in this sector are too stiffly set-up, robbing them in extremis of the security and predictability that create a really fluid drive. It's an arguable point, but we have to agree that you really do feel confident at speed at the wheel of this car. 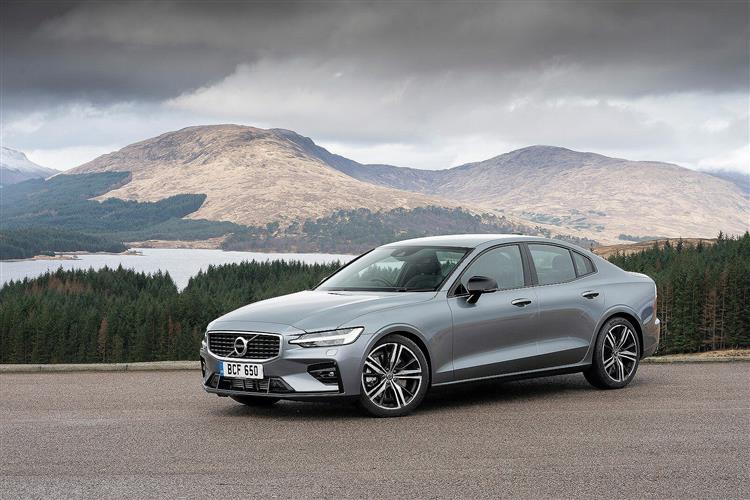