Kia adds another option to the Ceed range with this trendy XCeed SUV. Jonathan Crouch checks it out.

Kia's XCeed gives the Korean maker yet another option to offer buyers seeking a stylish, well-equipped compact SUV. You might feel that this bulging segment doesn't really need any further options but Kia was determined that the Ceed family should offer one and has engineered this smart Crossover contender with characteristic thoroughness.

It's easy to see why Kia is offering this XCeed compact SUV; sales of Crossover models like this are going through the roof just at present. It's less easy to see where it fits within the Korean maker's model line-up. After all, at much the same price point as more affordable XCeed variants, Kia has its Stonic small Crossover. And plusher XCeed derivatives overlap with the brand's Niro SUV hybrids and some versions of the company's mid-sized Sportage SUV. Then of course there are also versions of the Ceed hatch, the Ceed Sportswagon estate and the ProCeed sports estate. Complicated isn't it...

Don't expect shattering performance - but then buyers in the compact SUV segment aren't usually looking for that. The suspension has been revamped for SUV use compared with regular Ceed models so that it can combat this higher-sided model's body roll through the bends. The XCeed uses the same engines we're familiar with from elsewhere in the Ceed line-up. That means the range kicks off with a 118hp 1.0-litre T-GDi three cylinder petrol powerplant. Next up is a petrol 1.4 T-GDi with 138hp (also available with DCT auto transmission). The auto's not especially quick-responding, but it's a smooth-shifting 'box. Kia has also developed a 1.6-litre petrol plug-in hybrid variant you can ask your dealer about. The potent 201hp 1.6-litre petrol turbo unit from the Ceed GT is missing though. If you want to fuel from the black pump, there's also a manual-only 1.6-litre CRDi diesel, offered with either 114hp or 134hp. And the brand is promising that the black pump-fuelled models will shortly be embellished with mild hybrid tech. All XCeeds get lane keep assist and forward collision warning fitted as standard, while pedestrian detection comes as part of an optional safety pack. The First Edition version also features smart cruise control (on DSG auto variants), plus blind spot collision warning and a tyre pressure monitoring system. 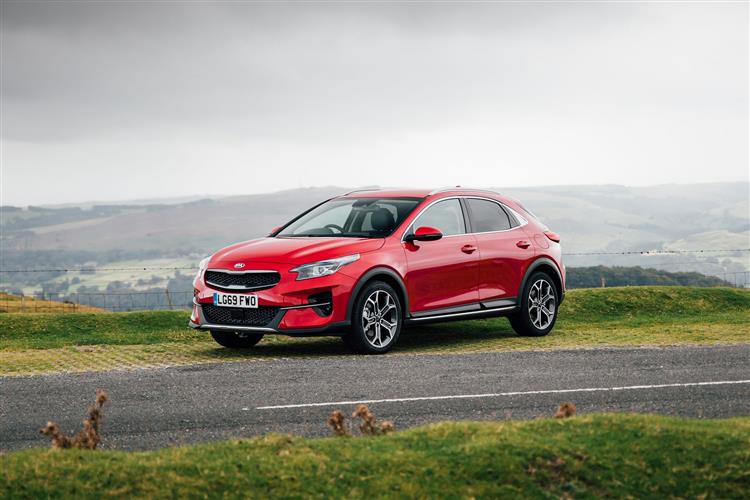