You don't need a Porsche Cayenne Coupe, but we're guessing you'd really, really like one. As the name suggests, this is a sportier-looking version of the standard Cayenne large SUV and it's been engineered with all the same Porsche thoroughness. Which means that it's the very first large SUV Coupe model the market's been offered with handling that can really match the arresting looks that tend to be common in this segment.

Is this Porsche Cayenne Coupe really the answer to a question no one was asking? That's what the car magazines say. But, as so often, they're wrong. Actually, quite a considerable number of well-heeled folk have been asking for a large luxury SUV with a sporting coupe-style look. That's why BMW's X6, the car that started this trend, is now in its third generation and Mercedes has just launched the second generation version of that car's closest rival, the GLE Coupe. Porsche wants a slice of that action too, hence the need for this Cayenne Coupe. You actually wonder why the brand didn't do this before. Its conventional Cayenne SUV has always been the most sporting model in its segment. If its sharp handling prowess could be transferred into a sector rather in need of sharp handling prowess, you'd think fireworks could be in prospect.

You might not be surprised to hear that a Cayenne Coupe drives almost exactly like an ordinary Cayenne. Of course, the standard Cayenne isn't 'ordinary' in the way it hurls nearly 2.3-tonnes of Zuffenhausen real estate up the road. Porsche reckons this variant is even better because of its fractionally lower centre of gravity, though any difference, is there is any, is virtually impossible to detect - on the public road anyway. As with the conventional car, the steering is on another level to what you get from large SUVs from most other brands, being meaty and direct. And, as on the conventional car, you get the option of 'PDCC' 'Porsche Dynamic Chassis Control' that features active anti-roll bars that aim to reduce body lean at speed through the corners. Through those bends, traction can be maximised if you paid for the 'PTV Plus' 'Porsche Torque Vectoring Plus' rear differential and the rear wheel steer axle. As in the straightforward Cayenne line-up, the engine range kicks off with a turbocharged 3.0-litre V6 petrol unit developing 330PS. Next up is the Cayenne S, which gets a twin-turbocharged 2.9-litre V6 good for 440PS. At the top of the range is the Cayenne Turbo, which gets a 4.0-litre twin turbo V8 putting out a potent 550PS. There are also two plug-in variants making up for the lack of a diesel: first the 462PS E-Hybrid and, for the really high rollers, a top Turbo S E-Hybrid with 680PS. 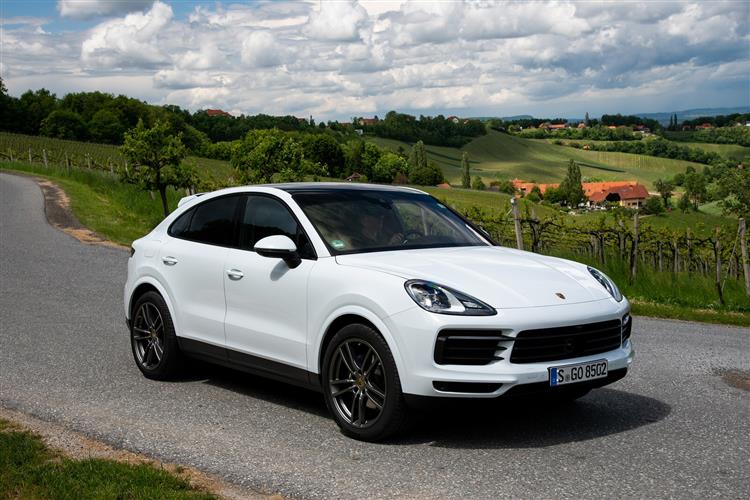