For decades now, we've had a means of propulsion infinitely more eco-friendly than anything electrical. Hydrogen fuel cell models such as this Hyundai NEXO emit nothing more harmful than water and would make far more sense than any EV if they were cheaper and had a better developed fuelling infrastructure to support likely owners. In the future, that'll change. And when it does, this car shows just how ready Hyundai is to respond.

Hyundai, like Toyota, claims to have originated hydrogen fuel cell development. The Korean maker's ix35 Fuel Cell model hit the market back in 2015, about the same time as the Toyota Mirai. Which was subsequently followed by the Honda Clarity FCV, these two cars being market's only other hydrogen models designed to date. The NEXO is certainly well placed to benefit from the upsurge in demand for this technology that should manifest itself when China gets round to delivering on recent promises to dramatically develop its hydrogen fuelling infrastructure. The absence of this in the UK though, means that demand for this Hyundai on these shores will be tiny.

You might imagine that the NEXO drives a bit like an electric car - which is true to a point, in terms of the eerily quiet refinement and the regenerative braking force you can fiddle with to increase energy harvesting and off-throttle retardation. You don't get the surprising initial speed of an EV though and in theory, a hydrogen fuel cell model ought to be a bit more agile because it doesn't have to hump around a load of heavy battery cells. Sure enough, tipping the scales at 1,814kgs, the NEXO is around half a tonne lighter than, say, a Jaguar I-PACE or an Audi e-tron, though to be frank, it doesn't feel like it. Hopefully, future fuel cell models will handle a little more sharply than this. The powertrain's built around a fuel cell of Hyundai's own design comprising of a cathode, an anode and a polymer electrolyte membrane. This sits beneath the bonnet generating energy for a 161bhp electric motor that drives the front wheels and is also boosted by a 1.56kWh lithium-ion battery that harvests energy from the regenerative braking system. Performance, which sees 60mph crested from rest in 9.5s en route to 111mph, is sufficient but unremarkable (an I-PACE, say, would sprint to that figure in half the time) and the car rather runs out of puff once you approach the legal limit. Of more interest to an eco-minded potential operator is the news that the NEXO 'cleans the air around it' as it drives, its air filtration system removing particles down to the level of PM 2.5. 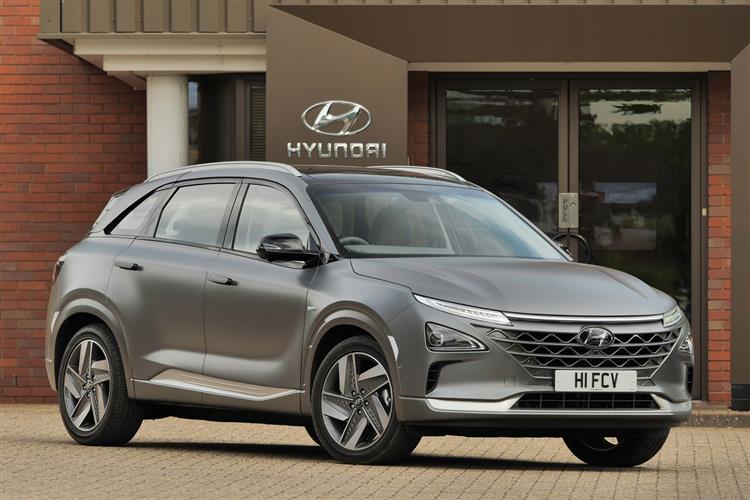