The Lexus LC Convertible offers the potential for a fresh direction for this premium Japanese brand. Jonathan Crouch reports.

The LC Convertible is, says Lexus, "one of the most sought-after vehicles we've produced". It's the first time the brand has properly ventured up towards the three-figure price bracket and to justify that, this open-topped sports car will have to be very desirable indeed. All the signs are that it is. It's come equipped to take on the luxury convertible segment's very top contenders, with drive dynamics that work on the track as well as on the highway. Plus there's styling that'll cause a stir in the High Street and a gorgeous cabin.

"From the moment we finished this car", says Lexus Group Vice President David Christ, "we've been thinking of what comes next. This car signals the future direction of our brand". Clearly then, the LC Convertible is significant - more than just a derivative of the impressive LC Coupe. Like that fixed-top model, it's aimed directly at the BMW 8 Series and the Porsche 911 - and as with those cars, more powerful versions will inevitably follow. If the brand can be successful in this model's more exalted price bracket, Lexus will feel confident about producing super-luxury SUVs and boardroom-level saloons - and much else might open out.

Not long ago, if Lexus had launched a car into this segment, it would have been a direct competitor to the Mercedes S-Class Cabriolet. But it says much for the way that the LC Coupe has changed our perceptions of what this brand's dynamically capable of that we now have no trouble in perceiving this LC Convertible as a rival to far more sporting large luxury soft tops like the Porsche 911 Cabriolet. There's only one engine on offer, a 32-valve old-school normally aspirated petrol V8, but it's more than up to the job of moving this car along very quickly indeed, storming to 62mph in 5.0s en route to 168mph. Inevitably, this 457bhp 5.0-litre powertrain lacks the torque that would come as part of the turbo technology that all this car's competitors use, but Lexus reckon you won't really register that thanks to the trick this V8-powered LC has up its sleeve; a 10-speed automatic gearbox. The idea is that with so many gears, you simply won't notice the atmospheric 5.0-litre unit's relative lack of pulling power because of the way this car compensates with such a closely-stacked multitude of ratios. This open-topped model represents the Lexus brand's first use of a fabric folding top, rather than one with metal-folding panels. It doesn't activate quite as quickly as the roof of an open-topped Aston Martin Vantage, but a raising or lowering time of just 15 seconds is more than acceptable and it can happen at speeds of up to 31mph. With the roof in place, refinement is virtually as good as that of the fixed-top LC Coupe and you can really concentrate on this car's surprisingly drive dynamics. Yes, it slightly favours comfort over dynamism (as opposed to a rival Porsche 911 Cabriolet in which it's the other way round), but we think many potential customs might prefer that. And, if you wish, you can improve handling bite by stretching to the top 'Sport+ Package' model we tried, which also includes more responsive variable-ratio steering and a Torsen limited slip differential to help get power down through the corners. 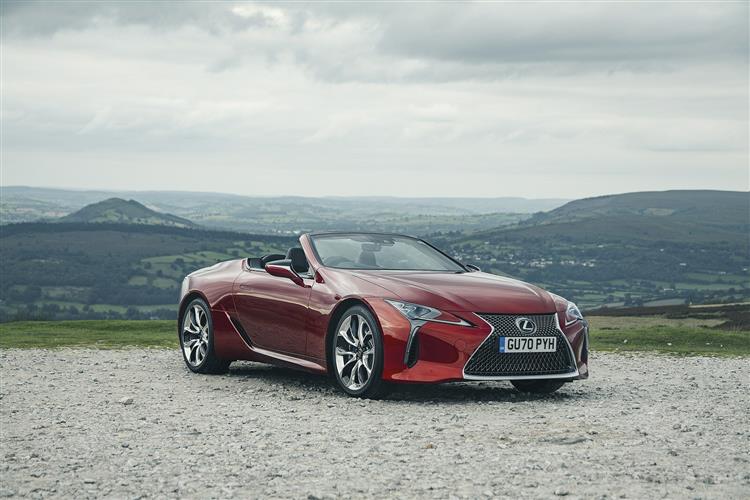