OFF ROAD CHARGE (some text hidden)

Subaru's XV e-Boxer crossover gets a self-charging hybrid engine. And it's still more capable off road than you might expect a car in the family-sized Qashqai segment to be. Jonathan Crouch reports.

Subaru's XV mid-sized SUV now focuses on self-charging hybrid power and features a light facelift to keep it competitive in this growing segment. The e-Boxer engine allows this full hybrid crossover to directly take on segment models like Toyota's C-HR, Kia's Niro and Hyundai's Kona hybrid, cars that already have this technology. For a little more money, this Subaru offers more space, much more capability but a little less efficiency.

For years, Subaru's have sold on tough, no-nonsense virtues - like practicality and go-anywhere 4WD. If that meant they weren't quite as efficient as rivals, then so be it. But customers aren't quite so forgiving these days. Even something very capable needs to have a degree of electrified efficiency in today's market, hence the need for the Fuji Heavy Industries brand to introduce its e-Boxer full-hybrid engine. We've seen it in the company's Forester mid-sized SUV, but we look at it here in the brand's more compact XV crossover model. The XV e-Boxer can't be plugged in, but it is a proper self-charging hybrid. In contrast to the mild hybrid engines being currently marketed by Ford and Volkswagen Group brands which feature powerplants that can't at any time run independently on battery power, so are nothing like as efficient as full-hybrids. So Subaru has done the job properly - to what effect in this XV? Let's find out.

For this updated model, Subaru has introduced enhanced 'X-MODE 'and 'SI-Drive' functions but otherwise, things are much as before if you happen to have been looking at the hybrid version of this car. The engine here is the brand's familiar normally aspirated 150PS 2.0-litre Boxer petrol unit, sending power to all four wheels via a CVT belt-driven auto transmission. But what's different here is that it's assisted by a 16bhp electric motor built into that Lineartronic gearbox, the motor powered by small battery under the boot floor. That's enough for all electric driving at speeds of up to 25mph. The electric assistance doesn't have much impact on performance - rest to 60mph takes 10.7s on the way to a top speed of 120mph. More significantly, peak pulling power isn't delivered until 4,000rpm, so the engine needs to be stretched quite a lot if you want to make any significant progress and the 'rubber band' characteristics of the CVT auto gearbox can be a further impediment to rapid progress. Still, all will be forgiven when you get this car off road. There's a decent 220mm of ground clearance and as usual with Subaru, a Symmetrical All Wheel Drive system that'll get you to places that other volume brand four-wheel drive mid-sized crossovers would struggle to reach. The e-Boxer's electric motor is used to help improve off-road ability, providing extra low-down pulling power when 'X-Mode' is selected using a rotary dial on the dash. This means the car can take on steep slopes and descents, shuffling power between its various wheels. Subaru says the XV can lean over at up to 30-degrees, an unheard-of stat for a car of this kind. For this updated model, Subaru has introduced enhanced 'X-MODE 'and 'SI-Drive' functions to give drivers reliable control at the push of a button. 'X-MODE' now features a dual function button to select 'SNOW/DIRT' mode for slippery surfaces covered with snow, dirt, or gravel. Or a 'SNOW/MUD' mode for especially treacherous road conditions where vehicles can become easily stuck, such as deep snow or dirt. There's also a drive mode system - 'Subaru Intelligent Drive' '(SI-Drive') -which allows the driver to select engine and transmission characteristics according to their driving style. Select 'Sport' mode for immediate throttle response or 'Intelligent ' mode for more fuel-efficient power delivery. 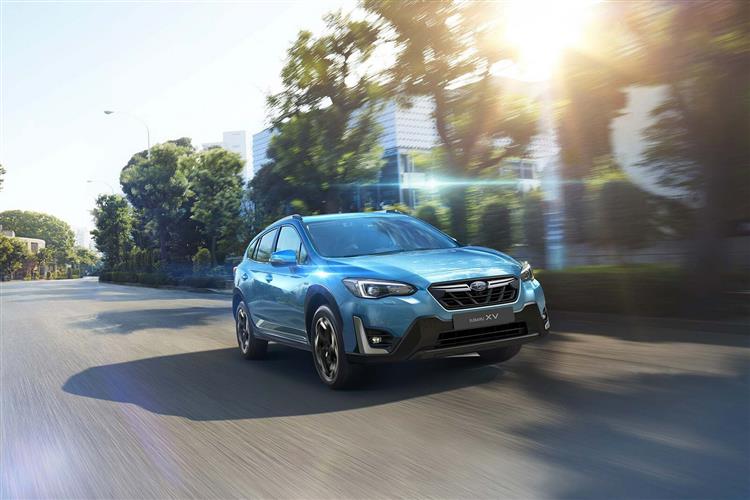