A mid-sized 7-seat SUV is nothing new but one with a proper full-Hybrid engine that you don't have to plug-in very definitely is. That's what's on offer from Toyota's Highlander Hybrid. Does any car in this class make more sense than this one?

The Highlander is a newcomer here but North American, Japanese and Australian markets have already had three previous generation models, the first of which launched back in 2000. This MK4 design was introduced at the 2019 New York Auto Show and the growth in European sales of mid-sized 7-seat SUVs has convinced Toyota to offer it on this continent, including in our market. The Highlander sits in Toyota's range between the RAV4 and the Land Cruiser and its size and 7-seat format puts it up against similarly orientated SUV rivals like Skoda's Kodiaq, Peugeot's 3008, SEAT's Tarraco, Volkswagen's Tiguan Allspace, Hyundai's Santa Fe and Kia's Sorrento. There are various types of hybrid technology featuring this sector, but the Highlander's alone in offering a full-Hybrid engine and self charging tech.

Basically all the engineering here is borrowed from a Toyota Camry, including the TNGA-K Global Architecture platform and the 2.5-litre Atkinson cycle full-Hybrid petrol engine, which features electric motors mounted on both axles. The rear motor operates the variable 4WD system, though you shouldn't consider this a really capable off-roader - choose a Land Cruiser if you want that. Light tracks are well within the Highlander's remit though - indeed, there's a selectable 'Trail' function amongst the driving modes. In addition, there's an electric-only 'EV' mode, which won't take you very far - only just over a mile - but it does differentiate this Toyota's full-Hybrid powerplant from mild hybrid units that can never run independently on electric power. Full-Hybrid tech isn't about zero emissions range - buy Toyota's RAV4 PHEV if you want that. Instead, it's about the electrified elements constantly chipping in to help the petrol powerplant, which happens to such a large extent that for large chunks of time in urban driving, as in a Prius, you won't be consuming any fuel at all. The four-cylinder engine develops 241hp and works via a CVT auto gearbox. There's a capable 2-tonne towing capacity. 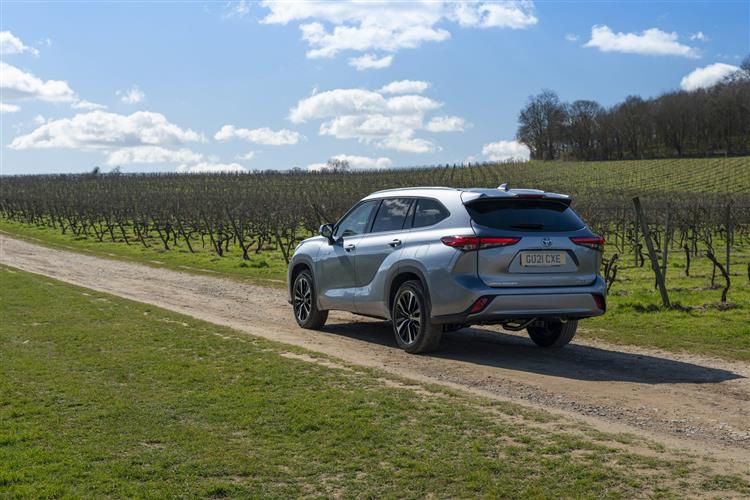