Hyundai looks to have scored another direct hit for its N performance division with this i20 N. Jonathan Crouch takes a look.

If you like your small hatches serious and spicy, Hyundai's wild i20N will be right up your street. Compared with the Madras served up by its Fiesta ST arch-rival, it's a bit more Vindaloo, but if you think that's what a shopping rocket supermini should really be about, you'll like this one very much indeed.

Performance branding can sometimes be a disappointment - names like CUPRA and DS spring to mind. But Hyundai's N Series of uber-fast hatches has proved to be anything but. Masterminded by former BMW M Series boss Albert Biermann, credibility for the Korean maker's hot hatches has been achieved remarkably quickly. Things kicked off in 2017 with a car we really liked, the i30N, which got closer to unsettling the Golf GTI than we ever thought it would. That model's now been followed up with two more, the Kona N small performance crossover; and the subject of this review, the i20N, a ballistic supermini-on-steroids aimed directly at the small fast hatch champion, Ford's Fiesta ST. The Hyundai N recipe is a familiar one by now. Take the standard hatch; stiffen it up a bit; insert a bigger, gutsier engine. Then remove the wheels, brakes and suspension and replace with circuit-tuned parts. Finally, season with a bit of madcap visual drama. Which clues you in for what we're in for with this i20N.

All the right figures display on paper here for fully paid-up membership of the frantically fast section of the hot hatch supermini sector. There's a 1.6-litre four cylinder turbo engine developing 204PS and 275Nm of torque - pretty much what you'll get from a rival Ford Fiesta ST. The i20N's performance figures near-replicate those of that Ford too; rest to 62mph in 6.7s (the ST is 6.5s) on the way to 143mph. But those stats don't really deliver the full story here. For that, you'll need to press the potent-looking blue button next to the airbag cover. One press gives you Hyundai's standard dynamic pre-sets; two presses gets you your own preferred settings from the cheesily-named 'N Grin Control' system. There are three each for engine response, steering weight, ESC intervention and the rev-matching function, plus you can alter the bassy note of the big-bore exhaust; brilliant. There's even a driveline option for left foot braking. Get all this right and you'll get yourself a really engaging tarmac tool. More engaging than a rival Fiesta ST? We'll need to try both cars - and try them back to back to see, but early impressions suggest that this Hyundai runs the ST close. More surprisingly, given the madcap looks, it's also a match for its Ford counterpart when you're not in the mood to make the most of the superb corning grip enabled by the standard limited slip differential. Despite the firmer suspension with its new springs, dampers and roll bars, commuting in this car wouldn't be the bone-shaking exercise in endurance that rally replicas of this kind often tend to subject you to. The 6MT manual gearbox has been refined and reinforced to cope with higher revs and torque - and the standard Launch Control system. So, there you have it: almost right first time. Just like the i30N. The Hyundai N division success story continues. 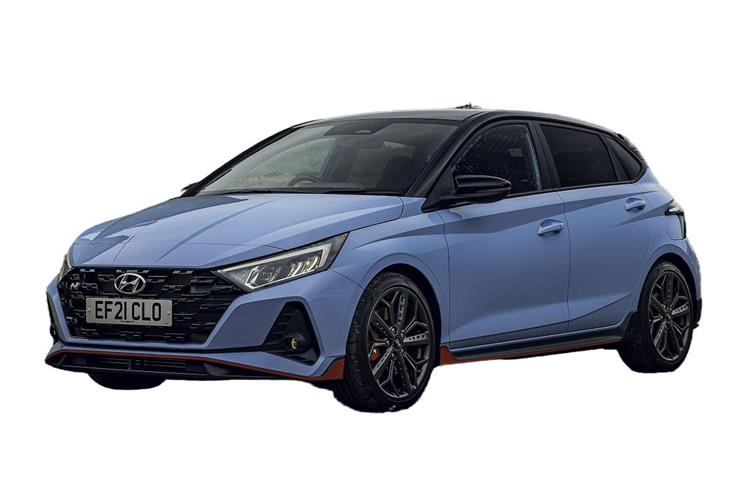