4x4 vehicles might form an integral part of virtually every mainstream car manufacturer's model range these days but it wasn't always so. Retreat through the annals of history for a few years and the 4x4 was a more specialist proposition that comparatively few manufacturers paid much attention to. One hangover from this era, for people who remember it, is that certain badges sit more comfortably on the nose of a 4x4 than others. Land Rover, Jeep and the big Japanese names all have longstanding pedigrees in the field and are names that seasoned buyers will trust. Chevrolet does too, even if it may have escaped many in the UK, and that could bode well where its Captiva compact 4x4 is concerned.

Chevy pick-up trucks like the S-10 and Silverado, along with SUVs carrying the Blazer and Suburban badges, are massive in America - that's in both senses of the word. They've been household names since the early 80s and while they were never sold officially in the UK, they do indicate an element of 4x4 expertise on Chevrolet's part. Admittedly, it was large, profligate vehicles in this mould that were latterly responsible for leading parent company General Motors into a spot of financial bother but the Chevrolet Captiva is on a far more reasonable scale designed to tally with European sensibilities. The Captiva was launched in 2007 a little in advance of the arrival of its sister vehicle, the Vauxhall Antara. It was a larger and consequently more practical proposition than most of the rival compact 4x4 models on the market at the time and the roomy cabin allowed the inclusion of two extra seats in the back of higher spec models. With a seven-seat capacity, the Captiva had the ability to crossover into the market for larger family 4x4s and a distinct edge over many of the compact 4x4 alternatives. The car was launched with a 2.4-litre petrol engine and a 2.0-litre CDTi common-rail diesel that originated from the Vauxhall stable and was to be the big seller. LS, LT and LTX trim levels were offered with the LT and LTX having the seven-seat option and the LS offered only in front-wheel-drive form. An Ikon special edition model was launched in 2009 bringing a package of styling accessories and extra equipment at a reduced price.

What You Getword count: 347

The Captiva isn't one of these SUVs that tries to smooth over its styling in a bid to look more like a conventional car. All the tell-tail 4x4 styling devices are present, from the cavernous wheelarches to the chunky bumpers and big chrome grille. The design is clever in reducing the perceived bulk of what is a surprisingly spacious vehicle. Viewed in isolation, the Captiva looks to be about the size of a Toyota RAV4 or a Suzuki Grand Vitara but the tale of the tape shows that it's a much heftier piece of metalwork. For a start, it's fully 4,639mm long, compared with the 4,415 of the Toyota and the 4,470mm of the Suzuki. That's why the Chevy has room for three rows of seats in some versions. The Captiva's rear seats are usable too, that's by fully-grown people with a full complement of limbs. As an adult of six feet tall, you'd need some considerable powers of endurance to sit out a long journey in the third row but you could do it, unlike in many of the Captiva's rivals. For kids, the space is generous. In the five-seat versions or with the rear seats folded, there's a 465-litre luggage capacity and by folding all of the back seats down, it's possible to fit a huge 1,565 litres of stuff inside. General build quality around the cabin is also pretty good and certainly better than you'll find in some of Chevrolet's smaller passenger car offerings. The suspension layout consists of a MacPherson strut configuration in front and an independent four-link design in the rear. Ventilated disc brakes are standard on all four wheels. The Captiva's 4x4 set-up is an on-demand system, meaning that as driving conditions require, the rear axle is instantly activated via an electromagnetic coupling to give maximum traction through all four wheels. The set-up also seamlessly interacts with the ESP and ABS systems, enhancing driver control of the vehicle and safety margins. The ESP itself has additional functions like HBA (Hydraulic Brake Assist), HDC (Hill Descent Control) and ARP (Active Rollover Protection). 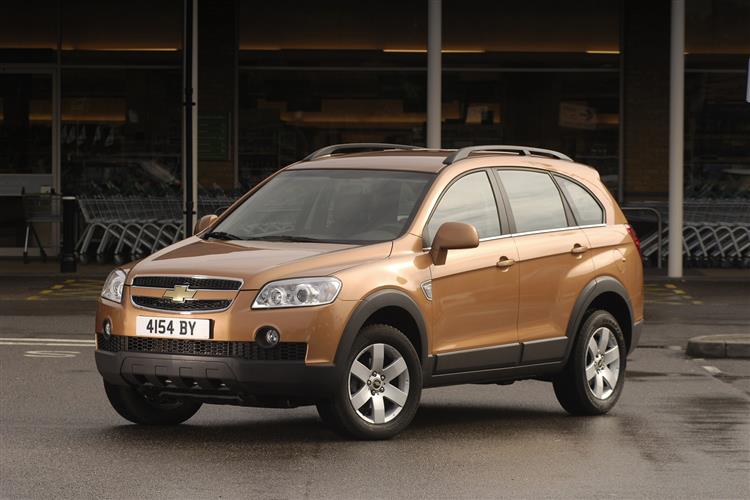