Back in 2005, rarely had we seen a car arrive that dominated its class as comprehensively as the original '987' series Porsche Cayman. Before this purposeful coupe was launched, all sorts of manufacturers were making very good money with very mediocre offerings in the sports coupe segment. Afterwards, they either shaped up or shipped out. Tracking down a decent used Cayman can be a little more problematic than you'd at first think given the rate of take up. Buyers often aren't keen to sell and those that do often want silly money. Here's what to look out for.

Rumours of a 'Boxster coupe' had been circulating for some time before this car's 2005 launch, after some suspiciously malformed looking 911 test mules were seen pounding around the N??rburgring in Germany. What appeared to be holding Porsche back was a realisation that this could be the car that torpedoed the company's bottom line. The 911 had long been the goose that kept on laying golden eggs for Porsche and to introduce a cheaper and more capable alternative was dangerous business indeed. Think about it. When they set out to build a no compromise supercar - the Carrera GT - it didn't sling its engine out back as the 911 does, instead using a mid-engined layout akin to the Boxster and Cayman. Any chassis engineer worth their salt will be able to expound at length on the compromises such a rear-biased weight distribution forces on handling dynamics. Whispers that the Cayman S has lapped the Nurburgring in 8 minutes and 11 seconds - a full 4 seconds quicker than a 911 Carrera - were denied by Porsche and the company then fuelled a whole series of additional conspiracy theories by refusing to fit the Cayman with a limited slip differential, a useful tool for very committed driving. The first Cayman model to arrive in the UK was the 3.4-litre S, landing in dealerships in December 2005. Although there were some grumbles over its pricing, which was significantly higher than a Boxster S and which Porsche played off by pointing to the Cayman's larger capacity engine, sales went stratospheric. Early doubts that the car looked a little gawky were dispelled once customers had the chance to walk round one. In May 2006 the entry level 2.7-litre Cayman filled out the range, and later that year Porsche fitted the Cayman S 3.4-litre engine to the Boxster but continued to charge more for the fixed-head coupe.

What You Getword count: 334

The Cayman shares some 40 per cent of its componentry with the Boxster in order to share development costs between the two product lines but aside from that roof, there are some notable differences. Although track and wheelbase is the same as per the common platform, the suspension was modified to endow the Cayman with a sharper feel. Firmer springs, stiffer dampers, meatier anti-roll bars and beefier bushings all combined to give the Cayman a more focused agenda. There were also changes to the stability control system and the anti-lock brakes to give keen drivers a little more margin for experimentation. Built alongside the Boxster at the Valmet plant in Finland, Porsche has suggested that most of the Cayman's conquest sales came from Audi TT owners looking to trade up to something a little more hardcore, but Nissan also rushed a more powerful 350Z through development to stem haemorrhaging sales. While the Cayman looks great from the front and rear, the three-quarter aspects of the car can occasionally photograph a little gawky given the domed rear haunches and low bootline. The Cayman shares the Boxster's bonnet, headlights, front wings, doors and tail lights but beyond that the steel metalwork is all custom (expect to see some jealous vandals modifying the 'C' in the rear badge). The front bumpers were modified with bigger air intakes into which beady fog lights are indented. The tapered engine intakes on the side of the car don't look quite as elegant as those on the latest Boxster although the rear hatch design is a very neat piece of styling. This opens remotely via a button on the key fob and offers up a reasonable amount of space. Some storage space behind the seats gives a total of 260 litres which, when added to the 150 litres up front, means the Porsche is more practical than it has any right to be. Slightly longer than the Boxster, the Cayman is also 13mm taller, yet the width remains unchanged at 1,801mm. 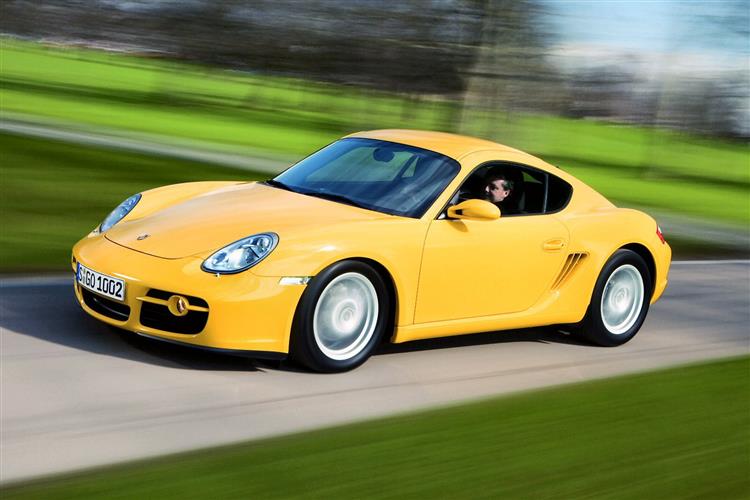