THE LAST WORD IN FAMILY TRANSPORT (some text hidden)

With every successive generation, Renault's Espace has become bigger, slicker and more sophisticated, Scenic and Grand Scenic models filling the vacuum it left beneath it. The 2002 model fourth generation Espace was a big reach upmarket and whilst Renault realised that sales volumes would never replicate the Espace's glory days of the late eighties, it nevertheless meant that they possessed the MPV that all the rest had to look to in terms of style leadership and prestige. A used Espace lands you these attributes at more manageable asking prices.

Renault, it seems, have an infinite ability to surprise us industry watchers. The Espace came straight out of the blue when it was launched in 1984, and few recognised the potential of the mini-MPV market that Renault so cannily cornered with their Scenic. Latterly, Renault have been growing increasingly bold, with the adventurously styled Megane II and the flights of fancy that are the Vel Satis and Avantime models. Therefore, it would be reasonable to assume the latest Espace, launched in November 2002, would be something radically different to its predecessor. The New Espace, as Renault prefer to call this fourth generation car, is an evolutionary advance over its predecessor rather than anything manifestly revolutionary. What is surprising is that Renault have, if anything, toned down their recent excess of novelty and have restored some normality to the Espace. Whereas the outgoing model was built around a radical spaceframe chassis with composite parts, the Espace instead opts for a more conventional steel monocoque platform shared with the Laguna and Vel Satis. Only the wings and tailgate are now made of plastic composites, the doors and bonnet being fabricated in aluminium with a steel roof. The choice of engines was also widened with a superb 3.0-litre diesel and a punchy 2.0-litre turbo petrol unit being standout units. A mild facelift was carried out in early 2005 followed by a more far-reaching one in early 2006. The later set of changes brought a 175bhp 2.0-litre dCi diesel engine to the line-up, introduced swivelling bi-xenon headlamps that turn with steering inputs to illuminate round corners. You'll spot the post facelift Espace by its thinner bumpers and simpler grille. The trim levels were re-jigged at the start of 2007 with the Team model taking over from Authentique and Expression at the bottom of the range. There was also a Tech Run special edition.

The exterior styling is a little more angular than the outgoing Espace, although few will have any cause for complaint. The detailing is very neat, with rakish scalene triangles formed by bevelled front and rear wings. The interior will be largely familiar but Renault have taken the concept of hiding all the major instruments and controls to extremes. A single central digital display shows most of the main functions, but the stereo controls are hidden under one of a multitude of flaps, as is the optional satellite navigation system. The controls for these features are a little fiddly, although the door-mounted air conditioning and ventilation controls are well executed. The Espace has gained an additional 57mm of rear headroom and a not inconsequential 225mm of length behind the front pair of seats. Unlike the Citroen C8 and Peugeot 807 with which it will compete for the bulk of its business, the Espace does without sliding doors or eight seat options and instead offers five stand alone rear seats that are identical, each incorporating its own seat belt, which means that they can be repositioned anywhere on the four full length or four 225mm semi tracks. Safety has been well attended to, with curtain airbags that cover all three rows of passengers as well as the more usual twin front and side balloons. The four outer passengers in the rear also get chest airbags, making the Espace a vehicle that must be quite magnificent to crash in. 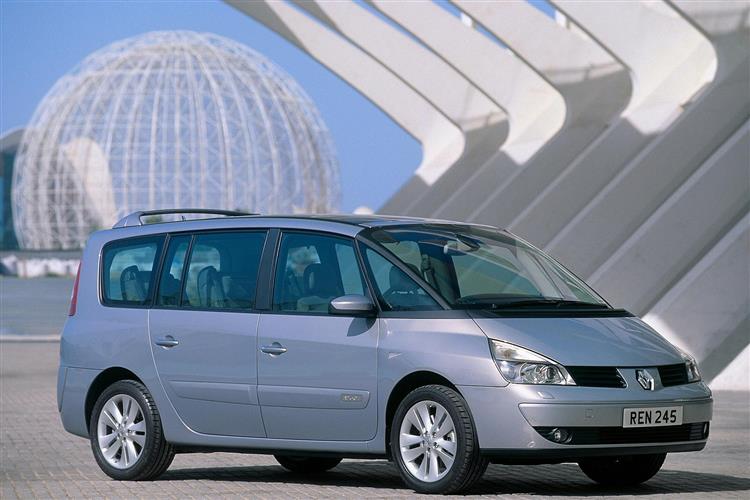