Although it may not have revolutionised the luxury 4x4 genre quite so radically as the BMW X5 did, the Volvo XC90 moved the state of the art on in a way few thought possible. In many ways it was perhaps better than even Volvo realised, the Swedish company continually raising the new price of the XC90 in an attempt to find a point where demand slackened off. So far that point has yet to be found. So far the plaudits for the XC90 have just kept coming. Used examples are now starting to appear but don't expect any bargains. You may have to beat a queue of prospective purchasers to the punch.

Better late than never is the motto best applied to Volvo's XC90. The Swedish company's core brand values of safety, family and quality are nowhere better exemplified than in a big Sports Utility Vehicle. Okay, so the other Volvo brand value, environment, had to play a slightly withdrawn role, but it's a wonder the XC90 hadn't appeared earlier. The company attributes this lateness to a desire to defend its traditional estate car markets, and a niggling factory capacity problem - issues now resolved. Yes, we've had Volvo's V70 Cross Country, a car which carved an enviable niche for itself in the large estate crossover market, but the Swedes have missed much of the big money game. With sales of SUVs spiralling and vehicles like the Mercedes M-Class and the BMW X5 coining it, Volvo appeared to be sitting on its hands. Some speculated that as part of Ford's Premier Auto Group, the big Ford family 4x4 was going to wear the badge of partner company Jaguar in a bid to spike the guns of Porsche's Cayenne, but they were way off beam. Others felt that PAG would be unwilling for Volvo to poach sales from established brand Land Rover. Wrong again. The XC90's shape was penned by Doug Frasher, an ex-NASA wind tunnel engineer who is now employed in Volvo's California design studio. His design was selected in a rather unconventional beauty contest held in the 40-degree heat of the Arizona desert. Volvo's hot weather proving facility outside Scottsdale was the venue and three full-size mock-ups were presented to Volvo's top design gurus from no fewer than thirteen different countries. In such sweltering conditions it would have been tempting to green light anything and retire for a cool beer, but after much consideration Frasher's design was voted favourite and has subsequently appealed to UK buyers. Enormously. Rarely had Volvo ever had such a hot cake on their books. When it was first launched in June 2002, the entry-level D5 S model retailed at £28,400. In the following period Volvo consistently nudged prices higher, justified in some part by minor trim revisions in 2003 and has introduced an Executive model to sit above the S and SE variants. With the asking price for the entry level car comfortably over £31,000 by 2005 and the waiting lists as big as ever, Volvo are perhaps still undercharging for the XC90. Admittedly, a shake-up of the range in 2005 resulting from modifications to the D5 diesel engine does distort the picture a little. From that point on, the 2.5T engine became the entry-level option with the erstwhile entry-level model, the old 163bhp 2.4 D5, offered only as an automatic and renamed 2.4D. The revised D5 delivered 184bhp and compliance with the Euro IV emissions regulations. Major changes were on the cards in the spring of 2006. The XC90 received a facelift with revised tail lights more body-colouring to the external fittings and a touch more chrome. The engine range from this point on was 184bhp D5 diesel, 3.2-litre straight six petrol and 4.4-litre V8. Specifications were also upgraded with a new SE Lux trim level being introduced between the existing SE and Executive strands. A little later, the more dynamically-focused SE Sport derivatives were introduced.

What You Getword count: 208

Unlike most of its rivals, the XC90 seats seven as standard with a set of rear seats that adults can occasionally use. Despite this, the car's footprint is no bigger than a Land Rover Discovery. Part of the reason for this apparent miracle of packaging is the compact transverse engine. Despite needing US sales to make the venture commercially viable, no monster V8 power unit is available, Volvo instead comfortable with either the D5 five-cylinder diesel engine or the familiar T6 turbocharged six-cylinder petrol powerplant. Volvo realised that the majority of big 4x4s are bought by women who cite the sense of security as a key buying criterion and set up a women's reference group to run the rule over crucial aspects of the car's design. Unbeknown to many, Volvo has in fact tried to enter this market four times in the past, but failed to get their proposals off the ground for a number of internal reasons. The fifth attempt draws upon much of that experience and explains why the XC90 has an uncanny right-first-time look to it. Despite a front end that makes Beachy Head look apologetic, the overall feel isn't overly macho, with steeply raked front and rear screens reducing the overall perception of bulk. 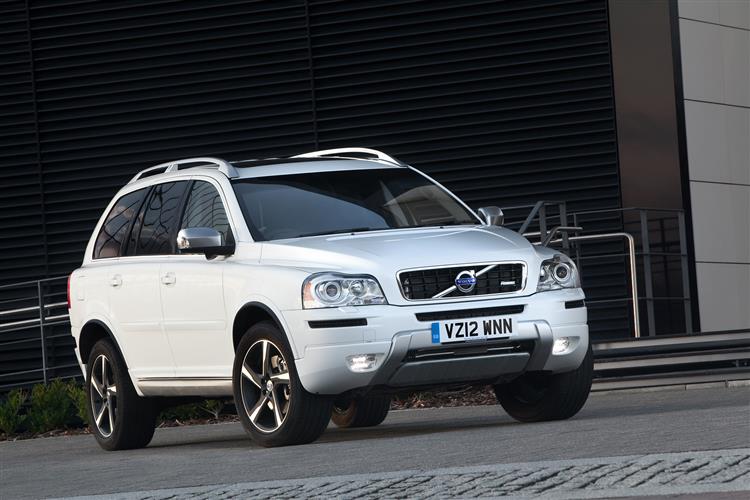