BACK TO THE FUTURE (some text hidden)

The C6 marked a stunning return to form from Citroen. The company had slowly been drifting towards convention, their products becoming increasingly similar to sister company Peugeot's. Then this appeared. Sleek, quirky and sporting a shape that could be nothing but Citroen, the C6 was an instant hit, with magazine reviewers at least. The general public were rather more resistant to the idea of a Citroen that could cost almost £40,000 in top specification and sales weren't huge. Nevertheless as a technology showcase and a halo product to lift Citroen's image, the C6 is a winner. Used buyers are now starting to sniff around the C6, attracted by somebody else taking the initial hit of depreciation and a reputation for solid mechanicals.

The C6's ancestry can be traced back to the 1998 Paris Motor Show, when the C6 Lignage concept was first displayed. Designed by Citroen's Creative Styling Centre, the Lignage at first appeared a flight of fantasy, appearing as it did alongside stolidly practical models such as the Saxo, Xsara and Berlingo. The throwback appeal of the C6 Lignage was more than just symbolic. Between 1928 and 1933, the C6 dominated the category of top-of-the-range vehicles of the period, with more than 60,000 examples sold and many celebrities taking the opportunity to be photographed in one. Although it's doubtful that today's A-listers will be sending their people to their local Citroen dealer, the C6 does inject a welcome dose of glamour and panache into a market that has been reduced to a shattered husk. Such has been the domination of the German premium marques in the executive saloon market that those mainstream brands that used to do very good business catering to those who either couldn't or wouldn't stump up the premiums to buy German have now largely abandoned the sector. Cars like the Saab 9-5, the Lexus GS and the Volvo S80 just about scrape by, but Vauxhall and Ford appear to have lost interest and Citroen's partner Peugeot can only really claim success for their 607 in their home market. It all looked a bit drab until the C6 arrived on showroom floors in early 2006. At first, just 2.7-litre diesel and 3.0-litre petrol models were offered but stung by the rather slow sales, Citroen introduced a more affordable 2.2-lite diesel C6 in summer 2007. In mid-2009 Citroen introduced the 3.0-litre V6 HDI diesel engine, a progression from the 2.7-litre V6 HDI with a similar twin-turbo configuration. By this stage the range was down to diesel engines and automatic gearboxes only, the Lignage trim level having been axed.

The C6 is a hard car not to admire, if only for its sheer bloody mindedness. Citroen are well aware that this is a car that will sell in its hundreds rather than its thousands and as such, have set out to make it a no-compromises 'proper' Citroen of the old school. That doesn't mean it's old-fashioned. Far from it, the C6 is jam-packed with high-tech features, but rather it's a car of distinction and singularity - a car that a French head of state would see fit to ride in. Buying one in this country is quite a different proposition. Motoring journalists aren't always to be relied upon to offer reliable financial advice, but anyone choosing this car over the Jaguar S-TYPE, a model that uses much the same engine and which is priced broadly equivalently, needs to know what they're getting themselves into. Residual values aren't going to be strong and that needs to be taken into account when calculating the cost of ownership. That said, you are getting an awful lot of car. To specify a BMW 530d up to this car's level would tack another £10,000 onto the German car's price, which then makes the residuals look a little more realistic. Three trim levels are offered. The entry-level model didn't get much play but the Lignage and Exclusive models are easier to track down used. Equipment levels are generous right across the range with the entry-level car being fitted with Hydractive suspension, a pedestrian-friendly Active Bonnet, dual zone air-conditioning with soft diffusion, a speed sensitive rear spoiler and laminated side windows. There are also automatic headlamps and wipers, nine airbags, ESP with traction control, Xenon lights, tyre pressure monitoring and an on-board trip computer. That's more equipment than many rivals' flagship models but this C6 also adds cruise control, wheel-mounted stereo controls, electrically adjustable seats and an electric parking brake. 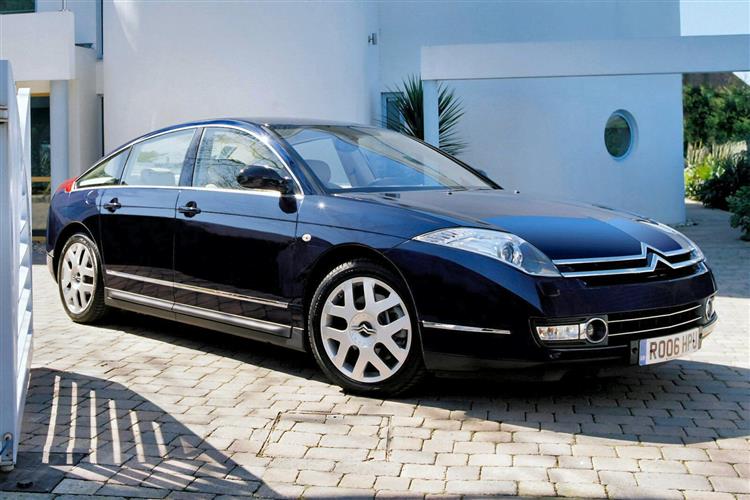