THE LIGHT FANTASTIC (some text hidden)

The 2003 model year Jaguar XJ is a car that needs no excuses. Previous generation XJ models always strived to match the German opposition. The latest XJ has the Germans scratching their heads in amazement. Quite how Jaguar managed to pull off making this car - comfortable, luxurious and elegant while still a convincing drivers' machine - is a work of genius. Much of the credit must go to designer Ian Callum and the engineering team who fabricated a great deal of the car from lightweight aluminium. If you can afford a used XJ, we have but one question for you. What are you waiting for?

The all-aluminium XJ was conceived in 2000 as a vehicle that could put Jaguar ahead of its rivals. Audi had already pioneered the extensive use of aluminium with its A8 model but Jaguar was to push the boundaries still further in terms of weight reduction. The cars were first shown at the 2002 Paris Motor Show. Developed under the project name of X350, the XJ was a major step forward, not only for Jaguar but also for the automobile industry, the first series-production car to use aluminium for the majority of its body components. Aluminium is a material that poses unique problems to the engineers, but offers unique advantages to the driver and owner. Jaguar's engineers were determined to overcome the problems they faced in order to create a car that would fully utilise twenty-first century technology. The body structure features the first use in the industry of rivet-bonded joining technology, with self-pierce rivets and aerospace-sourced epoxy adhesive joining together the aluminium pressings, castings and extrusions. The extensive use of aluminium made the new XJ up to 200 kg lighter than the model it replaced, despite the fact that the new car was longer, taller and wider than its predecessor, offering improved headroom, legroom and shoulder-room for all the occupants. In addition to being 40% lighter than that of the previous XJ, the bodyshell of the new car was 10-15% stiffer, offering valuable improvements in body strength and driveability. The new car was powered by the existing 4.2-litre V8 engine, in both supercharged and normally-aspirated forms. In addition there were versions powered by a new 3.5-litre V8 and a 3.0-litre V6. All engines were driven through a six-speed automatic transmission. Self-levelling air suspension was another innovation, and was standard on all models in combination with the CATS (Computer Active Technology Suspension) system. The 'aluminium XJ' was the seventh generation of Jaguar to carry the XJ badge. The first was in 1968. By the time the new car went on sale in the spring of 2003, some 800,000 XJs had been produced. It wasn't long before long wheelbase models appeared and these were supplemented with luxury Sovereign trim levels and an XJ6 entry-level car. A long overdue diesel powerplant was introduced in Spring 2005 and 2007 saw a fairly hefty facelift that sort to inject a touch more sportiness. The big bumper and side gills didn't sit too well with some Jaguar purists.

What You Getword count: 445

The XJ is so obviously a Jaguar; the svelte lines, the cigar-shaped fuselage and twin headlights all evocative design cues that define the marque's iconic saloons. Peer inside and you're greeted by the familiar tang of leather and the clubby veneer of the dashboard. Ostensibly, little appears to have changed. If ever a car could be held up as an example of appearances being deceptive, the latest XJ would be a good candidate. The very essence of the car, its bare metal, has undergone an enormous revision. Out goes steel, in comes aluminium, a result of which is that the XJ now weighs the same as the baby X-TYPE. The bodyshell is some 40% lighter than an equivalent steel body, bringing benefits not just in agility, but also in terms of performance, fuel consumption, emissions and corrosion protection. What's more, it's 60% stiffer, making the suspension designer's work easier and boosting safety, refinement and durability. David Scholes, the Chief Programme Engineer, sums up the thinking behind aluminium construction when he notes "we chose a lightweight aluminium vehicle architecture for the XJ not because it was something new, but because it enabled us to deliver real and significant benefits to our customers." Thanks to a longer wheelbase and a roofline that by some optical illusion is five inches higher than before, the XJ has a far roomier cabin than before. Headroom, legroom and shoulder room have all increased and the rear seats are no longer below par for the class. Luggage space has also increased dramatically. It's only when you park the latest car next to its predecessor that you can see the stylistic tricks employed by the designer. The front and rear overhangs are shorter so that the wheels intrude less into the passenger cell. The bonnet has been made shorter but at the same time, the XJ has retained that raffishly sleek look by fitting a more steeply raked windscreen. The doors are deeper too, allowing the stylist a bigger canvas on which to etch delicate strokes, an age-old piece of visual artifice that emphasises the car's length. It's a masterful job. The XJ takes the best aspect of the Audi A8 in terms of bodywork metallurgy and marries it to the one item that made the Mercedes S-Class such a success - self-levelling air suspension. This also represents a first for Jaguar and ensures that the full suspension travel is always available by automatically increasing spring stiffness relative to the car's payload. This means that the XJ never slumps when travelling heavily loaded, offers superb comfort and refinement and can also lower the ride height when cruising at high speed, increasing aerodynamic efficiency. 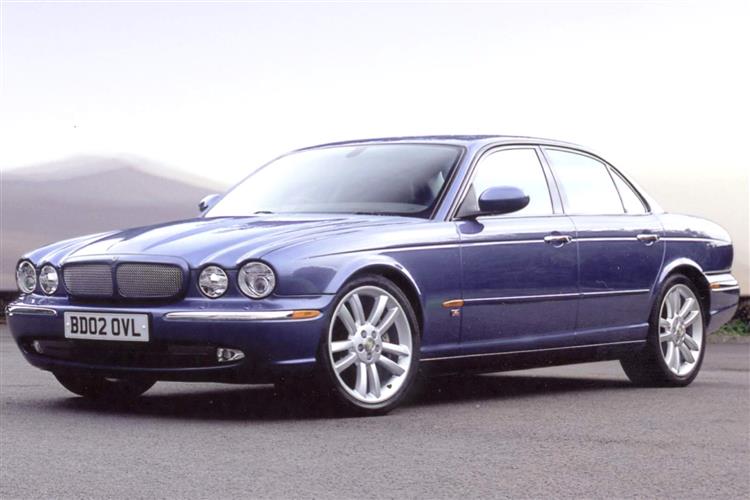