Few cars in recent times have provoked such a frenzied buying rush as the original 'R50'-series MINI Cooper. First unveiled in 2001, the car's waiting lists grew ridiculously long and models were changing hands at a premium well above the retail price. As production was ramped up to cope the waiting times fell and the Cooper and Cooper S variants remained hot tickets. Used buyers can now get hold of a Cooper model at sensible prices but how well does it stack up second time round?

Launched in April 2001, the MINI Cooper dumbfounded all the sceptics. Most fully expected that BMW's pastiche of a British classic would fall flat on its face but nothing could have been further from the truth. Although the Cooper package wasn't that far removed from the markedly cheaper MINI One, it was still the car to have for summer 2001 and even now it still cuts a dash. In October 2001 a four speed CVT gearbox option was introduced but this blunted the Cooper's rather modest performance still further and should best be avoided unless you use your Coop for a lot of city schlepping. The answer to the Cooper's relative lack of straight line poke came in 2002 with the introduction of the 170bhp Cooper S, a supercharged model with mouth and trousers. Shortly afterwards, the 200bhp John Cooper Works models were offered as an aftermarket conversion. March 2004 saw the unveiling of Convertible derivatives of both the Cooper and Cooper S while a rocketship 'factory' 210bhp Cooper S Works model arrived in November 2004. A Steptronic gearbox was released for the Cooper S models at the start of 2005. Special edition Cooper Park Lane and Cooper S Checkmate cars were also available in 2005/2006. The all new MINI was unveiled late in 2006 to replace this model, but it looked almost identical so dismay amongst the car's enthusiast following was kept to a minimum.

What You Getword count: 477

Despite its unashamedly retro appeal, the MINI has some reassuringly modern foundations. Clamber underneath and you'll spot BMW's Z-axle multi-link rear suspension. There's a wrap-around glasshouse with glazed-in side pillars featuring fully flush panes. This creates a 'floating-roof' effect which is emphasised by the Cooper's options of having the roof painted in black or white. There's a lot of chrome around the front end, but if you want a more subtle effect, it's possible to have the MINI de-chromed, swapping the brightwork around the grille and headlamps for sporty black trim. There's even the option of having bonnet stripes painted on! The Steptronic CVT gearbox, as seen on the MG TF, is now available with steering wheel mounted paddles. The Park Lane special edition came in one colour - Royal Grey metallic. Along with this came Park Lane leather and interior trim as well as Park Lane decals, a silver roof, two-tone sports leather steering wheel, 16-inch Bridge spoke alloy wheels and silver bonnet stripes. In addition, this special edition also featured as standard the Automatic Stability Control and Traction system, a rear spoiler, a 'chrome line'-trimmed interior and exterior, floor mats, passenger seat height adjustment, a storage compartment pack, front fog lights, automatic air-conditioning, an on-board computer, an interior lights pack, chrome mirror caps, front sports seats and white indicator lights. The Cooper S gets a rear roof-mounted spoiler, plus body-coloured re-modelled front and rear 'sport' bumpers, styled to contribute both to engine cooling and air flow. More air is channelled under the bonnet through an integrated black honeycomb grille in the bumper and there's a similar grille at the rear with two chrome-plated tailpipes sitting in the middle of it. Final touches include a couple of chrome-plated side grilles incorporating white indicator lenses and stamped with the Cooper 'S' and a chrome-plated fuel filler cap. The Cooper S Checkmate edition featured exclusive Space Blue metallic paint with Checkmate chequered decals on each wing just behind the front wheelarches. 17" Flame alloy wheels also served to spice-up the exterior and there were silver mirror caps that tied in nicely with a roof which was decked out in the same colour. The Checkmate also did away with the MINI Cooper's traditional bonnet stripes in favour of a giant 'U'-shaped decal which highlighted the Cooper S trademark letterbox bonnet scoop. Lighting was well catered for with xenon headlamps and a set of fog lights at the front. Inside, there were further additions to the standard trim. The Checkmate benefited from special 'Checkmate' cloth and leather interior trim, a three-spoke sports leather steering wheel, floor mats, passenger seat height adjustment, the storage compartment pack, manual air-conditioning, an on-board computer and the interior lights pack. The Checkmate package was largely cosmetic but one feature that will appeal to people also interested in the car's performance was the limited slip differential. 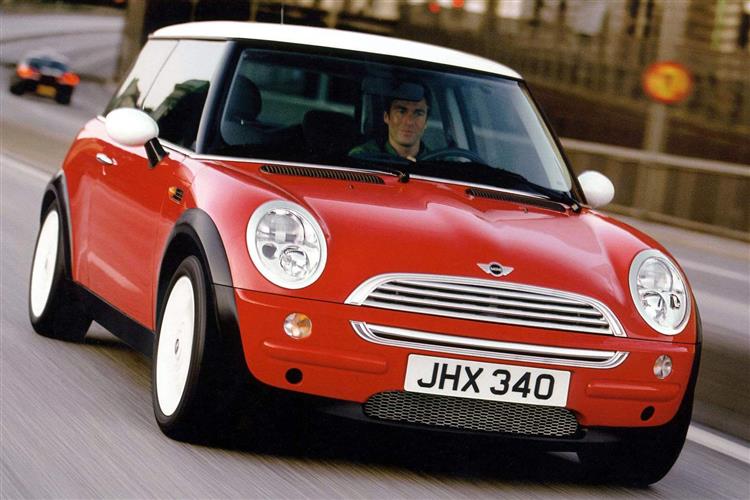